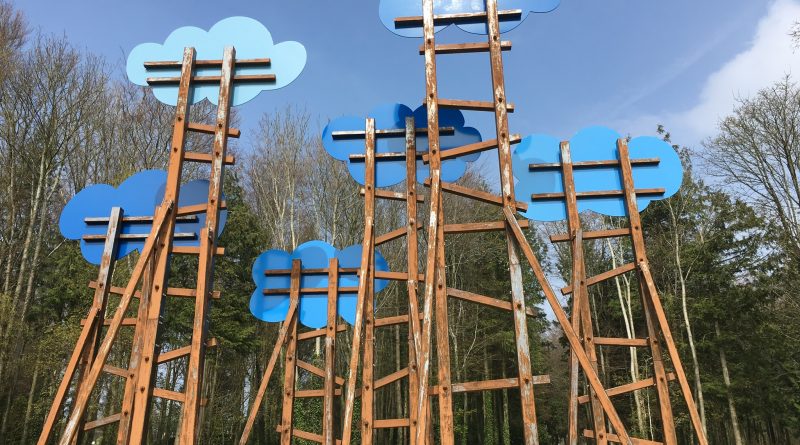 The Cass Sculpture Foundation is a little-known 26 acre, open-air sculpture park, tucked away behind Goodwood Racecourse.

Among gentle woodland you can marvel at a towering bust of Chairman Mao, see the spoils of an archaeological dig from the future, and picnic under a T-Rex.

The foundation is the creation of scientist and businessman William Cass and his wife Jeannette Cass, who live in the grounds.

Despite exhibiting world class modern art, you’ll be lucky to meet more than 20 people on a trip to this outdoor gallery where lofty art critics, energetic kids, and gawping novices alike will feel at home.

When you arrive at the park, the first port of call is a small building, with an adjoining indoor gallery space where you get your ticket.

Then, all you need to do is take advantage of the free tea and coffee, pick up a map of the grounds and start exploring. (Later, if so inclined, its here that you can purchase your 50ft sculpture to take home.)

This isn’t your ordinary sculpture park – a retirement home for the work of long dead artists, relying on public footfall and donations to stay afloat. Instead, Cass is an outdoor exhibition space and partner organisation, funding new works by up and coming artists.

Established in 1992, the Cass Foundation pioneered a new way of commissioning art. As a-not-for-profit, Cass identifies promising artists and asks which pieces they’ve always dreamt of making but never had the money or space to create.

The foundation then fronts the money required to realise their vision. The piece lives in the park and once sold the profits are split 50/50 between the artist and the foundation. The money received by Cass goes straight back into commissioning new works.

Since its inception, Cass has commisioned more than 300 works, and aims to produce 10 to 20 new pieces a year.

The Park and Art

The sculptures are dotted throughout the 26 acre park, and you can either follow the route on the visitor map or carve your own path through the grounds.

The first piece you’ll see, located just outside the visitor’s gallery, is ‘Identity’ by Wang Yuyang. This formidable sculpture gives physical shape to the words of Karl Marx’s Das Capital, translated into binary code and run through customised software. We were told the piece cost around £100,000 to make (all paid for by Cass) and is on sale for £300,000.

Two stand out works near the entrance are the statement piece ‘Escape (My Family History)’ by Li Jinghu and the playful ‘Sketch of a Blue Whale’ by David Brooks.

In ‘Escape’, a security camera looms menacingly over a patch of unkempt grass, enclosed by two wire-mesh fences. The awesome ‘Sketch’ is a depiction of a life-size blue whale weaving through a rigid tower of scaffolding.

The most immersive piece is ‘Ghost Trap’ by Lu Pingyuan: a battered old Volvo ominously lies nestled amongst the foliage, and a nearby stone engraving recounts the ghostly story of what befell its unfortunate passengers.

The spirit of the park is best described as ‘laid back’. Nothing is roped off; I even witnessed parents encouraging their children to climb the sculptures.

Due to the nature of the funding model, there has never been much publicity aimed at day trippers. This means you find a level of calm and space rarely enjoyed at a museum or gallery. There is no cafe so make sure you pack your hamper beforehand.

My favourite sculpture was the newest addition ‘Clouds’ by Olaf Breuning. The six powder-coated aluminium cut out clouds supposedly discuss “the issues of climate change.”

Yes, in many ways, its simply a lovely fluffy cloud scene. But its shades of meaning form and retreat as you slowly amble around the sculpture, revealing hidden depths.

A polite privacy notices warns you when you’ve accidentally strayed into the Cass’s home, located right in the center of the park. Though the house is owned by the family, the neighbouring Goodwood Estate lease the rest of the grounds.

Goodwood is owned by Charles Gordon-Lennox, the 11th Duke of Richmond (descended from an illegitimate son of the “merry monarch” King Charles II). You can even hear the cars, thundering around the famous Goodwood Racecourse, as you nibble your sandwiches on the artistically embellished (and not entirely practical) picnic benches.

The kindly gentleman manning the entrance building told us that once a year they close the park to the public, as the Duke uses the space to entertain distinguished guests from the global elite.

French prisoners of war, from the wars of Napolean, built the listed flint walls enclosing the Cass Foundation and wider Goodwood Estate. Rather than left to idle in a Portsmouth cell, the then Duke put them to work building his estate walls, and their handiwork can still be seen to this day.

Indeed, the Market House in nearby Chicester is mysteriously adorned with what appears to be a ‘Liberty Cap’ – a symbol of the French Revolution.

But how did such a beacon of modern art end up buried in the West Sussex countryside?

The life story of the foundation’s co-creator, William Cass, a fascinating tale of determination, shrewd business practice and luck.

In 1935, after the Nazis forced his father to sell the family company to Siemens for a pitence, an 11 year old William moved to England to start a new life.

At great personal risk, his father returned to Germany in 1939 to rescue his uncle Bruno. Hitler had even mentioned the family by name in a 1920 speech. As great art collectors and lovers (and early champions of Van Gough), the Cassiers had briefly appeased the Nazis by handing over Monets and Czannes to Goering.

Despite receiving asylum in Britain, in 1940 his father and brother were held in detention centers with other Germans as enemy aliens.

At 16, William joined an electrical repair business. In 1943, just before his 19th birthday, he was called up to the army.

After a bout of pneumonia suffered at a Glasgow boot camp, William was seconded to various training schools and ended up in the Royal Electrical and Mechanical Engineers. Around this time he anglicised his surname to “Cass” to disguise his roots in case of capture by the Germans.

William honed his electrical skills in the army, at one point manning the computers running the Clacton-On-Sea defensive artillery cannons. After the war, he earned a telecommunications diploma and in 1957 he led the team which produced the first ever 100% printed circuit TV set: the ‘Continental 17’.

He slowly moved into the world of art while building a solid career in business, often based on lucky chance meetings (including bumping into the head of WHSmith in the Savoy gents).

Thanks to a huge loan from a friend, William eventually became chief managing director of the famous Reeves paint company which he saved from bankruptcy. As a result, William acquired several art shops which are now run by his children. Cass Art shops – with the storefront logo “Let’s Fill This Town With Artists” – can be found all over Britain.

In 1979 he hit the big money, setting up the Image Bank London (later bought by Getty) with his brother.

As he and wife Jeannette began to think of retirement, they stumbled across a Bauhaus inspired art-deco homestead for sale in West Sussex. They scrabbled together the funds to buy their dream home and settled into country life.

But retirement didn’t slow down the Cass’. After a failed attempt at running an open-air theatre, they struck upon the idea of the sculpture park. The project began to snowball and the park became a success in the art world.

Due to becoming a leader in the exhibition of large scale modern sculpture, William advised Trafalgar Square’s Fourth Plinth Project, and since then they’ve worked with everyone from the RSA and Guggenheim.

Now into his 90s, William Cass is only just starting to take a back seat and let his vision continue forward without him.

How to Get There

The best (and probably only) way to get there is with a car. On route to Chichester take a side road off of the A27. Enter via the New Barn Hill entrance. Parking is free.

Cass is 6 miles from Chichester and 35 miles from Brighton. There is no cafe so stock up the hamper.