A muggle’s guide to Diagon Alley 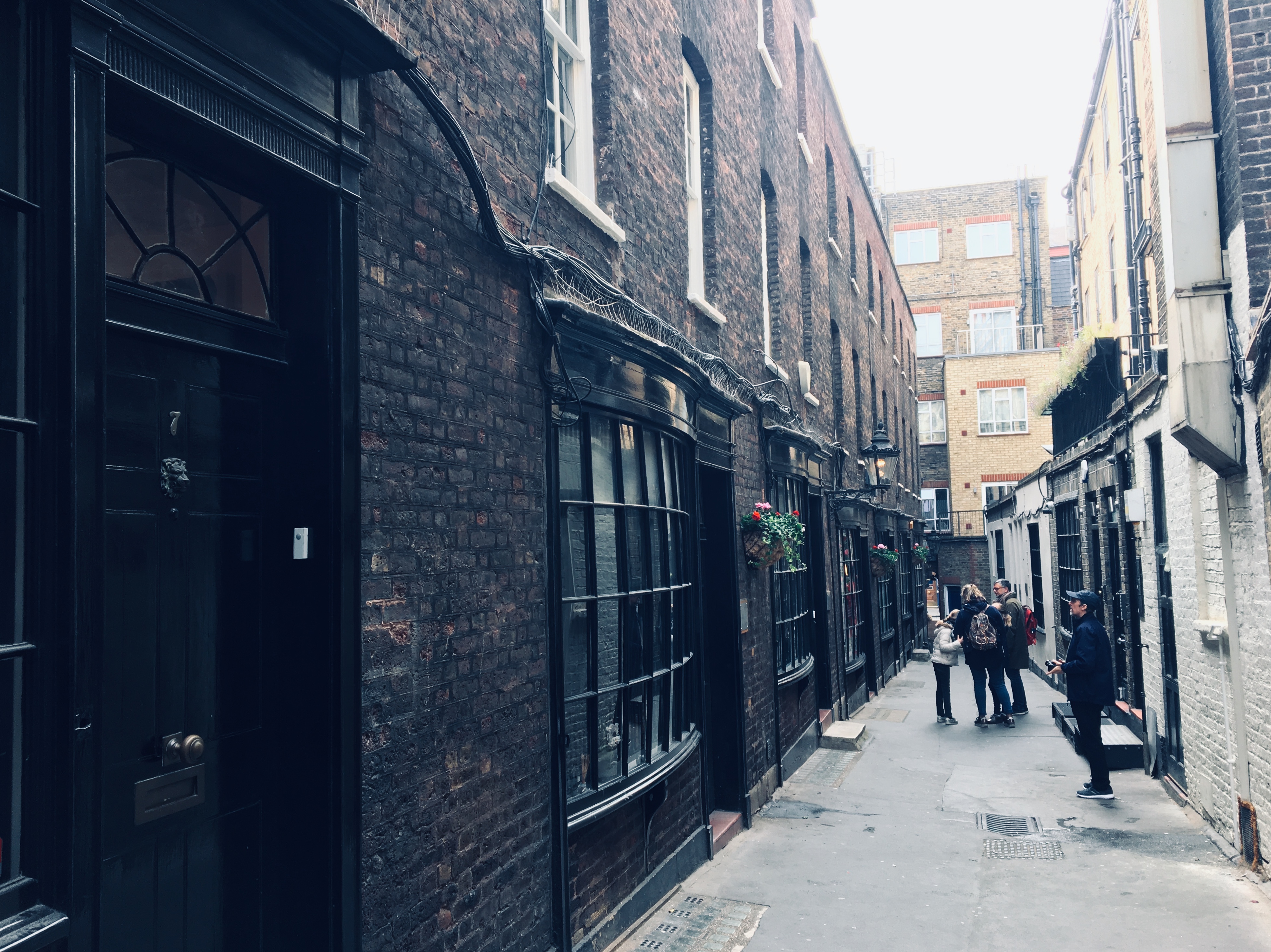 ODO has been to visit two locations used in the Harry Potter films for the famous street of Diagon Alley.  Or perhaps not.

Goodwin Court is included in the walks on an unsubstantiated theory that it was the original ‘inspiration’ behind Diagon Alley.

What is Diagon Alley?

For the few people who are still unaware of the Potter phenomenon, the central theme is that, unknown to most of us, there is a secret ‘otherworld’ where wizards use magic to battle each other for supremacy.

Harry first becomes aware of this otherworld, and his place in it, when he receives an invitation to enrol at the Hogwarts School of Witchcraft and Wizardry.

Before he can attend he has to stock up on everything he will need at his new school by visiting Diagon Alley. It’s a secret alleyway full of shops and businesses, hidden from the non-magical (muggle) world.

Anything a wizard or witch could ever want, could be found in Diagon Alley.  It is also the location of the Leaky Cauldron, a popular inn in the wizarding world.

Whether you are interested in Harry Potter or not, both of these locations are beautiful and full of atmosphere. Well worth a visit in their own right.

There has been a market at Leadenhall since the 14th century. The site was at the centre of Roman London.

The old market off Gracechurch Street in the City of London was demolished in 1881. The current beautiful buildings, designed by Sir Horace Jones, replaced it. He also redesigned the Billingsgate and Smithfield markets.

Typically Victorian, it’s a symphony of wrought iron and glass. At the central intersection of the market the ceiling is a vivid blue decorated with stars – truly magical.

The building encompasses both Lime Street and Cullum Street. Cosy ancient lanes that give the place the atmosphere the film makers were looking for when scouting for Harry Potter locations.

The buildings underwent a major refurbishment in the early 1990s which restored them to their former glory.  When I first started visiting Leadenhall in the 1980s, it was full of butchers and cheese shops. Cabinets outside the shops groaned under the weight of meat, game birds, pies and sausages.

Since the refurbishment, those butchers have disappeared, replaced by luxury dining and exclusive clothes shops. The giant Leadenhall Building now overlooks the market, one of a number of colossal sky skyscrapers beginning to dominate London’s skyline.

Although some of the atmosphere has gone from Leadenhall, the stunning architecture remains and it still feels very special.

Diagon Alley in the Olympics

The doorway to the Leaky Cauldron used in The Philosophers Stone is, in real life, a doorway to a migraine clinic in the market’s Bull’s Head Passage.

As well as its use in the first Harry Potter film the market has featured in many other films. It was also a spectacular inclusion in the Marathon course at the London Olympics in 2012.

Although not actually used as a location in any of the Harry Potter films, it is easy to understand why Goodwin Court could be the true inspiration for Diagon Alley.

For a start, it is perfectly possible to walk past entrances to the alley in St Martins Lane and Bedfordbury without ever being aware of this unique place.

In the early 1980s I had a Saturday job working in a snuff shop in Charing Cross Road. I would spend my lunch time exploring the nearby streets. I must have walked past Goodwin Court on dozens of occasions, but it never registered and I never ventured down this narrow atmospheric lane.

This is due in part to the two entrances to the Court; the one in Martins Lane has been incorporated into a rather undistinguished flat-fronted building with a doorway only marked as 55-56 St Martins Lane. At the other end of the Court in Bedfordbury there is another unremarkable doorway marked 23-24. Neither entrance gives any indication of the astonishing delights inside.

As soon as you pass through into the narrow passageway you enter a new world, secluded from the buzzy modern-day life outside. A sign in the lane states that the bow-windowed buildings were originally constructed in the 1690s when the lane was known as Fishers Alley.

It’s easy to imagine you have wandered into some Dickensian world. A pea soup fog, pierced by gaslight where you’re about to see Sherlock Holmes hot on the trail of Moriarty.

Like Leadenhall Market, it’s certainly a magical place waiting for us muggles to discover it.