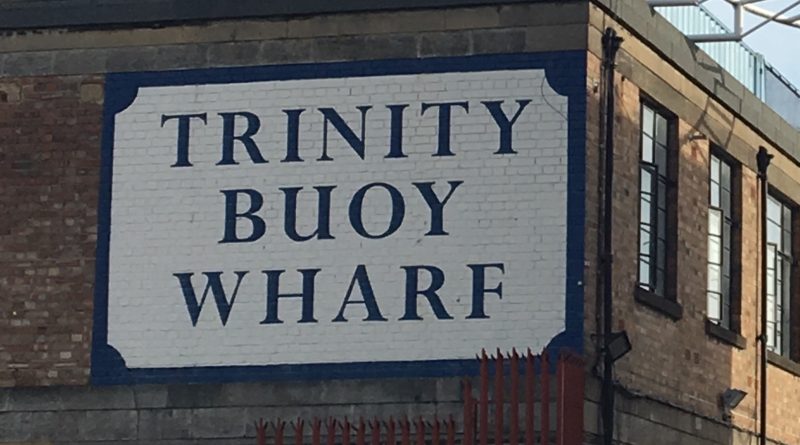 If London had an epicentre for oddness, it would surely be Trinity Buoy Wharf, situated at Bow Creek, the confluence of London’s River Lee and River Thames on the opposite bank to the 02 arena.

Where else could you see:

Like most of London’s docklands, the Wharf was left derelict and unused in the 1970s and 1980s.  It was given a new lease of life in the 1990s when it was regenerated as a place of ‘cultural and artistic activity’.   However, unlike much of the docklands redevelopment – with its ugly, oppressive and dehumanising architecture and lack of any real community feeling – the Wharf has managed to use, preserve and augment the site’s fascinating history to create an area of quirky individuality and imagination.

I first became aware of the Wharf when, travelling across the Thames on the Emirates cable car, I spotted a lighthouse on the north bank opposite the O2.   It seemed odd to have built such a structure at the heart of what would then have been the biggest docks in the world.  What perils lurked in the Thames at that point that were so serious they required a fully-functioning lighthouse to warn sailors?

The answer lies in the name Trinity Buoy Wharf.  Since Tudor times, the Corporation of Trinity House has been responsible for safeguarding shipping and seafarers, largely through the maintenance and installation of lighthouses and buoys.  The technological developments made by Trinity House were, in large parts, due to the pioneering work carried out by Sir Michael Faraday.    Famous for his work on electromagnetism and electric motors, Faraday was also the Scientific Advisor to Trinity House and worked on developing and improving lighthouses from 1836 until shortly before his death some thirty years later.  The lighthouse at the Wharf – known as the Bow Creek Lighthouse – was built in 1866 and was used as an experimental research base for Faraday’s work on lamps, lenses and ways of venting towers to prevent condensation.  An earlier lighthouse on the site was demolished in the 1920s.

Throughout most of the twentieth century, the lighthouse was used to train the lighthouse men and women who undertook the arduous task of being lighthouse keepers.  There is no doubt that the work undertaken at the Wharf helped save the lives of thousands of seafarers across the world.

Next to the lighthouse is what looks like a small garden shed.  This houses a small but fascinating museum exploring the life and works of Faraday.

The lighthouse is now open to the public at weekends and a short climb to the lamp room offers amazing views across the Thames.  It is also home to an intriguing musical venture set up by the former banjo player from the Pogue’s, Jim Finer.  Longplayer is certainly different from the three-minutes of magic in songs such as Fairy-tale of New York, which he co-wrote.  Longplayer uses “singing bowls” – an ancient Tibetan bell-like instrument, which in this case is played by machine and sometimes humans – to create an ever-evolving and ever-changing composition that began on 31 December 1999 and is not destined to end until 31 December 2999.

You can listen to a live feed of the music here: http://icecast.spc.org:8000/longplayer.m3u

As well as lighthouses, Trinity House also commissioned and designed lightships – in effect floating lighthouses – which were repaired at the Wharf.  To mark this connection, several lightships are moored at the Wharf including Lightship 95 which has been converted into a state-of-the-art recording studio used by acts ranging from established bands like 65DaysofStatic and Die, Die, Die to up-and-coming artists like George Ezra and Ed Sheeran.

After a hard morning’s work exploring the sights and sounds of the Wharf, we were spoilt for choice for refreshments.   Housed in an old shipping container – what else – The Orchard café serves coffees, lunches, all-day breakfasts and sandwiches with vegan and vegetarian options available.  Perched right on the bank of the Thames, it offers great views across to Greenwich and beyond.

We opted, however, for Fat Boy’s Diner.  This is a classic art deco diner, built in the USA back in 1941.  For fifty years it fed and watered Americans on the streets of New York and New Jersey.  It was shipped over to the UK in the 1990s, and after a short stint in Bishopsgate in the City of London it relocated to its current location here at the Wharf.  Great breakfasts, shakes, hot dogs and burgers.

Although we preferred a more gentle stroll around the site, others of a more adventurous nature could choose to work off their lunch at Parkour Generations, which describes itself as the ‘UK’s first purpose-built indoor parkour and functional fitness facility.’  Described by some as ‘the French martial art of running away’ Parkour is a fitness discipline which utilises ordinary street furniture such as walls, benches and even post-boxes to form a street obstacle course and uses running, jumping, vaulting and climbing to get from one end to the other. It is housed in the old chainstore where the massive cables and chains used for ships were tested and stored.

With London’s housing crisis deepening every day, the possibility of using high-quality pre-fabricated homes becomes more talked about.  One option is to use shipping containers as the basic building blocks for modular housing.  The Wharf’s Container City is a good example of how they could be used to build stylish and high-quality accommodation for a range of uses.

At its heart, the Wharf is a busy workplace, with dozens of studios and work spaces.  Over 500 people work there, in all sorts of businesses.  The Thames Clipper service headquarters is based here and all the props for the productions of the English National Opera are built in their workshop on the site.  There are a myriad of art studios and design companies.

As well as a busy work place the site is also a fun and witty art open-air art gallery where new works are always popping up.

The art on display is always changing, yet like the rest of the site, always seems to be using the site and its history as its inspiration.  This is what makes it such an intersting place to visit.

the nearest stop is Canning Town, on the Jubilee Line, followed by a 10 min walk.

Number 277, alighting at the Town Hall on the north side of East India (DLR) station. The D3 from Canary Wharf stops in Orchard Place, a few minutes walk from BTW.

A designated boat service called the Predator 2 (click here to read ODObill’s guide to this secret ferry service) runs from the O2 QEII Pier in North Greenwich to Trinity Buoy Wharf Jubilee Pier.  This is a fun way to get to the Wharf.  Its an old police river boat whose main purpose is to get Thames Clippers crews to its HQ at the wharf but it does carry members of the public.  The service is £2 each way and operates Monday to Friday from 5am – 7pm. Just call them on 07947 637925 when you arrive at either pier.  Please note that the Lighthouse and Longplayer music installation are only open to the public at the weekend so you will have to make alternative arrangements if you want to access them on your visit.

Follow signs to Leamouth on the A13 or from Aspen Way. At the Leamouth roundabout (Esso Petrol Station), take the Lower Lea Crossing exit. Almost immediately, go left after the bridge. At the T-junction turn right onto Orchard Place and follow the road round to Trinity Buoy Wharf.