By: ODOjack
In: Art and Architecture, Historical Footnotes, London
With: 0 Comments 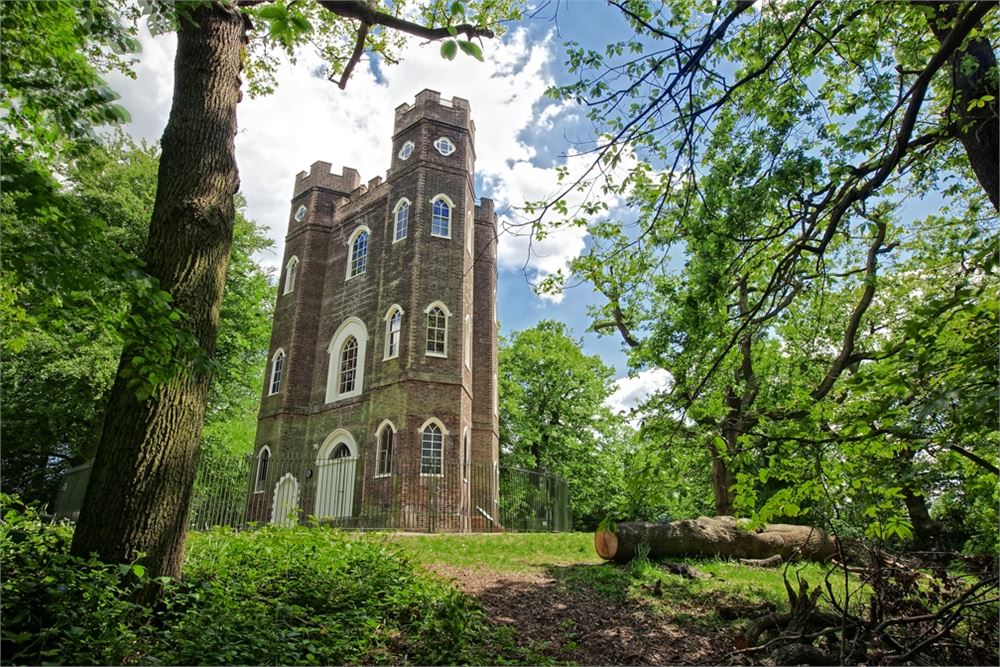 A historical footnote visited by ODOjack on the 17th March 2019

Nestled in the midst of Oxleas Wood (one of London’s only ancient woodlands) is a strange sight. A seemingly ancient building, complete with turrets, ramparts, arrow slits and as of 2019, a coffee shop serving cake and ice cream.

Lady James named the folly after the island fortress of Suvarnadurg in India. The original castle in India was destroyed by her late husband Sir William James whilst serving as Commodore in the navy of the East India Company.

When Sir William died, Lady James bought land at the highest point in Greenwich and commissioned architect Richard Jupp to design the tower. Jupp, famed for his work on lighthouses, included distinct circular windows and decorative ceiling panels in the design.

Severndroog would serve as a monument to Sir William’s life and work and supplement the view from Lady James’ home.

Over the year’s rumours of spectres haunting Severndroog spread: famed children’s author Edith Nesbit branded it “The Tower of Mystery” and included it in her 1901 ghostly children’s novel ‘The Would-Be-Goods’.

Like all good follies, Severndroog has no real purpose. However, in the first and second world wars the tower did find itself handed a military role: helping to warn London of incoming Luftwaffe bombers and the airships of Ferdinand von Zeppelin.

It was also tasked with helping protect sailors: a. 1788 issue of Gentleman Magazine advertised that the Trinity Lighthouse Company would be testing its lights from the castle, they asked all gentlemen within a 30 mile radius to report back on the effectiveness of each light.

In 1922, London County Council purchased Severndroog and it became a local visitor attraction with a ground-floor tearoom serving drinks and cakes.

In 1988, the local council was struggling to afford the building’s upkeep and were forced to close the site. It would remain shut for the next 20 years.

In 2002, a community group, the Severndroog Castle Building Preservation Trust, was established. In 2004, BBC TV series “Restoration” featured Severndroog with the aim of gaining support for restoring the building and opening back up to the public.

The View from the Top

The main attraction for visitors is the staggering, rare views of London which can be seen from the top of the tower. You can spot the Thames Barrier, winking at you in the sun; planes come and go at City Airport; the cable cars trundle back and forth across the river. I even had a clear view of Wembley stadium and I’ve heard rumours that on a clear day you can see as far as Windsor Castle.

The volunteers on site are immensely knowledgeable about the skyline and binoculars are available on the viewing platform.

Despite being a ‘Castle in the Woods’, Serverndroog can be reached quite quickly on TfL bus routes. Just jump on the 89 from Lewisham, the 244 from Woolwich Arsenal or the 486 from North Greenwich and alight at the Memorial Hospital. You can also catch the B16 from Eltham station and alight at the gloriously named Oxlea Meadow.

Admission is priced at a very reasonable £3 and it’s certainly worth it.

2019-04-10
Previous Post: I walked the Line: London’s first modern art walk
Next Post: On the trail of Hastings’ Concrete King