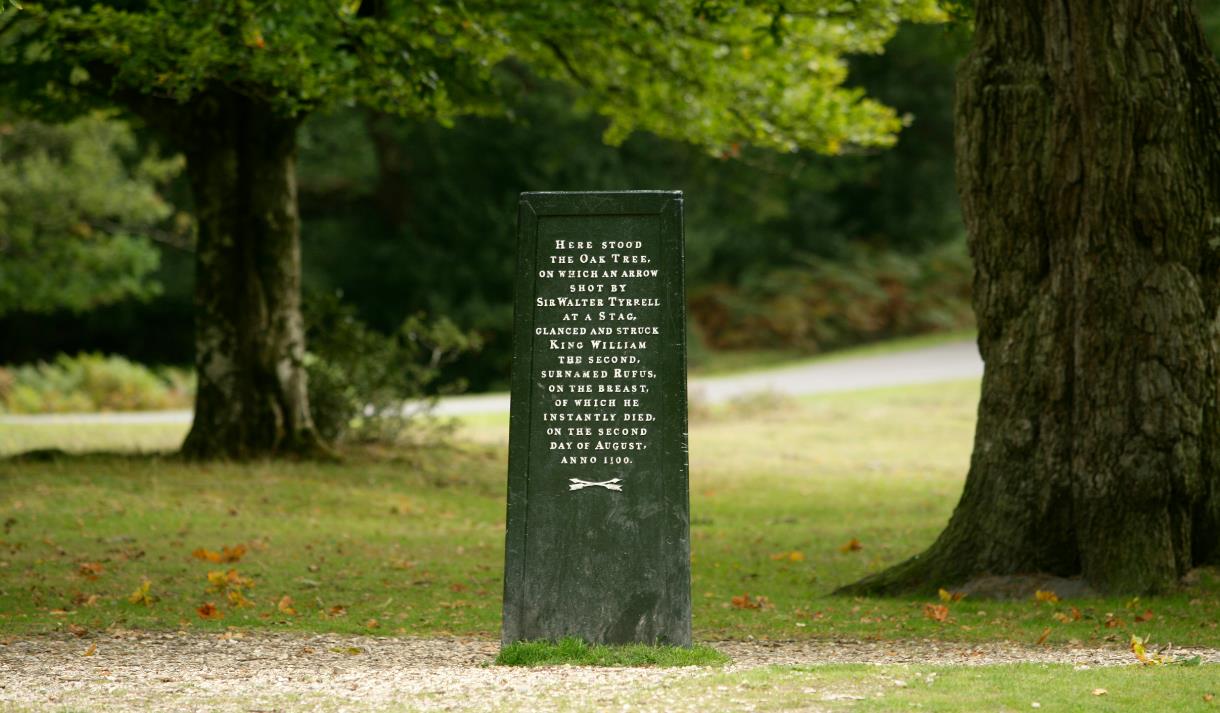 A Historical Footnote – visited by ODOmatt on the 16th April 2017

Celebrating the life of a tree caught up in the murder of an English king. Continuing on our theme of places where historical figures probably weren’t killed, we visit the Rufus Stone in the heart of the New Forest.

Hampshire’s beautiful New Forest,  just outside Southampton, is famed for it’s freely roving cattle and wildlife. At one point on our trip we came across a regal family of peacocks crossing the road and had to negotiate our car around a herd of wandering sheep.

The 570 square kilometres of national park are dotted with quaint villages, heathland and dense forest. The park was established by William the Conqueror as a royal hunting ground but it’s his less well known son whose antics in the forest arouse interest today.

Sandwiched between his famous, all-conquering father and the dramatic ‘Anarchy’, you’ll find the reign of little known King William II, aka William Rufus.

After the death of William the Conqueror in 1087, his eldest son Robert was given the Duchy of Normandy while favourite William was bestowed the crown jewel of England. William reigned as king of England for a short 13 years, before being cut down in his prime in a freak hunting ‘accident’ with an arrow in the chest. But more on that later…

Nick-named Rufus for his (disputably) ginger locks or his ruddy complexion, the second Norman king was a rambunctious, hedonistic and generally affable character. His catch-phrase was reportedly: ‘Per sanctum vultum de Luca!‘ (‘by the holy face of Luca!’) which he’d bellow in exclamation.

His insidious and persisting bad reputation was fuelled by a debauched lifestyle, rumoured homosexuality and disregard for the institution of the church,  which led ecclesiastical chroniclers to denounce his legacy. Modern historians are reconsidering his reign in light of this historiographical bias.

On the morning of 2nd August 1100, William and his retinue went hunting in the New Forest. During the hunt a stray arrow from the bow of a certain Sir Walter Tirel, supposedly deflected off a tree and found its way into William’s chest, whereupon he fell to the floor dying instantly. The Rufus Stone was later established to mark the spot where the complicit tree once stood. 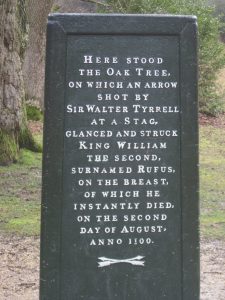 The earliest indication that this was the precise spot where the tree stood is from a visit by Charles II while fleeing to France after his father’s execution. A local pointed out a specific oak to the exiled monarch proclaiming it the one which deflected the regicidal arrow. The tree was later cut down and in the late 18th century the Rufus Stone was erected.

King George III (aka ‘The Mad King’) visited in 1789, commissioning the inscription that can be read today. The cast iron cover was placed in 1841 after repeated vandalism of the original.

With such a tenuous link through history I think we can all agree it is highly debatable whether or not even an innocent tree once stood here, let alone one allegedly caught up in the death of the king.

Since this infamous event, debate has raged on; was it an accident or premeditated murder? Rufus certainly wasn’t short on enemies.

Within a year of his coronation he was already facing rebellion. Norman nobles, concerned that their estates were now split between two squabbling brothers on either side of the channel, took up arms against Rufus. A large proportion of prominent Normans including our namesake Odo of Bayeux (an early Odd Day Outer) rebelled and were swiftly crushed by the king.

War in Scotland led to the death of Scottish King Malcolm III and the submission of the Scots to the English. Eventually William’s brother Robert went on crusade, reluctantly mortgaging Normandy to William. With total dominance, on the eve of his death Rufus was even planning invasions deeper into France.

Despite fighting across the sea in France, his own nobles at home, his two brothers and the Scots, William’s most famous and damaging feud was against the Church. In an under-appreciated episode of European history, King William II and bishop Anselm faced off in a dramatic confrontation rivalling the notorious feud between Henry II and Thomas Beckett, he of ‘meddling priest’ fame.

The Investiture crisis was a struggle between secular and church power which raged across Europe. William, a staunch believer in the supremacy of the crown, clashed with his Archbishop, Anselm, over who had the right to appoint bishops and church officials. On being denied taxes from Anselm William remarked, “I hated him before, I hate him now, and shall hate him still more hereafter.”

On his death, everyone fled the scene immediately, leaving a local peasant to cart the king’s corpse away and bury him. The noblemen rushed back to their estates to secure their lands, William’s brother Henry raced to the capital to seize the crown and Sir Walter Tirel fled to the continent in fear for his life.

It is clear many had much to gain from the King’s death. The papacy were rid of a tenacious enemy, William’s planned military campaigns on the continent came to an end and, most conspicuous of all, younger brother Henry, taking advantage of elder brother Robert’s absence, became king of England.

Though this makes for excellent historical gossip, it is just as likely to have been an accident. Despite Sir Walter being a famously skilful bowman, hunting was an extremely dangerous pursuit. In fact, William’s own brother Richard had died in a hunting accident in the New Forest thirty years before.

In a final twist, many years later a French chronicler who knew Tirel in exile recounts how Sir Walter “solemnly swear[s] that on the day in question he was not in the part of the forest where the king was hunting”. The case remains open.

The Rufus Stone is to be found right in the heart of the New Forest not far from the main road. Directly between Southampton and Ringwood turn off on the A31. We parked nearby and made our way there as part of a larger walk. Anywhere in the New Forest makes for a wonderful stroll but the official New Forest website will provide information on great walks that include the Rufus Stone.

Rufus got a stone but Sir Walter got a pub. Just round the corner you’ll find the Sir Walter Tyrell serving food and drink all day. We parked in the village of Brook and circled back via the Furzy Gardens tea room near Minstead, where you’ll also find The Trusty Servant pub. We stopped in Brook for dinner which has two great pubs The Bell Inn and The Green Dragon.