A Historical Footnote – visited by ODOmatt on the 28th Jan 2018

The quaint, unassuming town of Steyning in West Sussex is brimming with hidden history – from religious martyrs burnt at the stake to wheelbarrow toting St Cuthbert, the town’s unofficial mascot.

But perhaps the crowning historical footnote is to be found in the entrance of St Andrew’s Church. An old, battered stone displayed without ceremony (or even a description) is believed to be the tombstone of King Aethelwulf of Wessex. 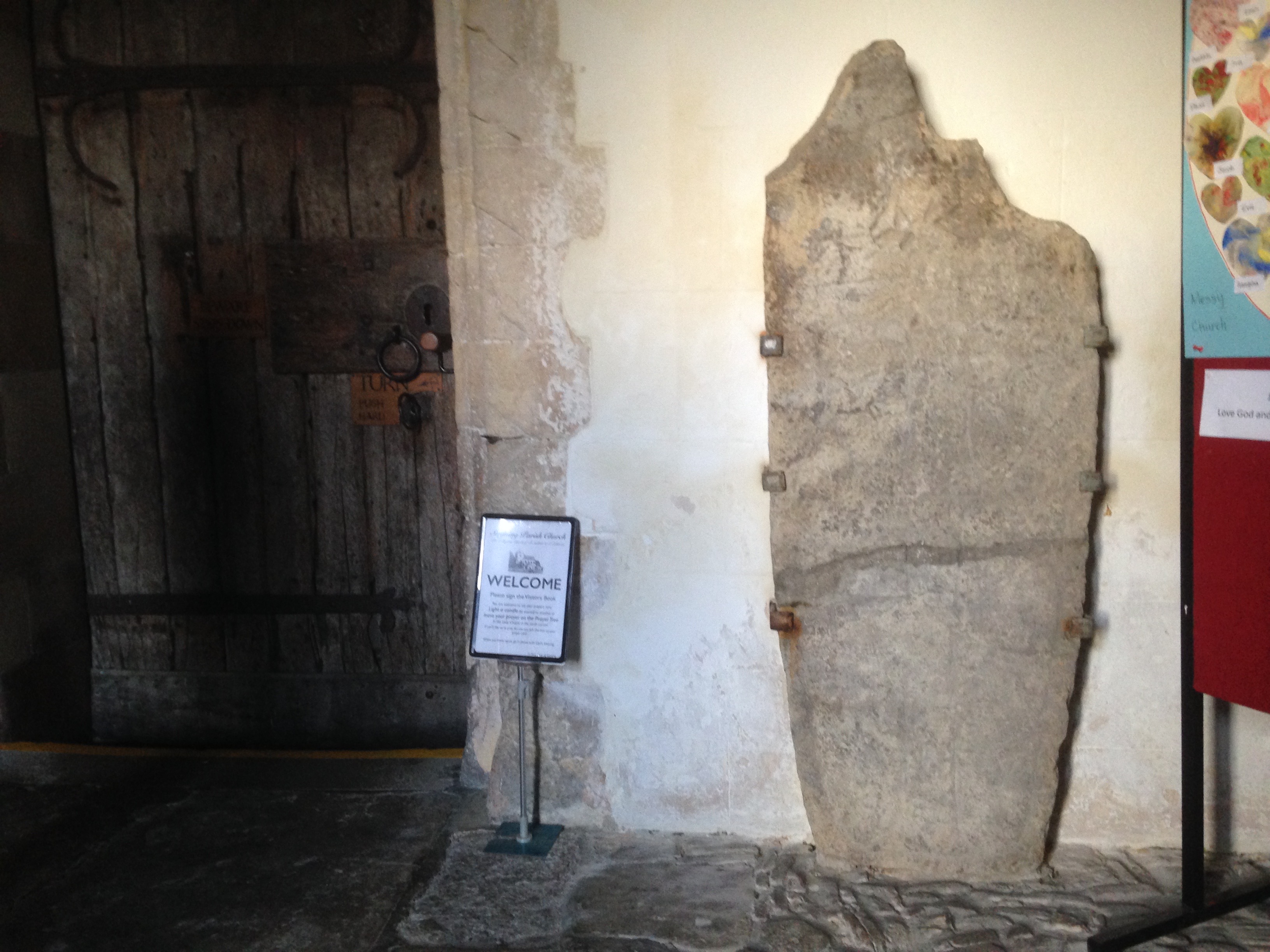 Reining as King of Wessex from 839–858 AD, he is the father of the first king of England: Alfred the Great.

During the early Anglo-Saxon period, England was split into several competing kingdoms, all vying to increase their territory and influence. During the period known as the Mercian supremacy (around 600 AD), the Kingdom of Mercia was the most powerful force in Britain. At the height of its power, Mercia controlled almost all of England below the river Humber.

Aethelwulf’s father, the legendary King Egbert (802 – 839 AD), ended the Mercian supremacy, securing Wessex as the dominant Anglo-Saxon kingdom of England and becoming a bretwalda (an overlord of other Saxon kingdoms) in the process.

During his father’s reign, Aethelwulf helped to conquer Kent and gained the submission of Sussex and Essex.

Aethelwulf ascended to the throne of Wessex in 839 AD, around the time the dreaded vikings were warming up. After many bruising battles, and by creating an alliance with the old enemy Mercia, Aethelwulf was able to fend off the Scandinavian threat. For the time being at least…

Aethelwulf died on 13th January 858 AD and was succeeded by his eldest son, Aethelbald.

Written several hundred years after the fact, the Annals of St Neots claim Aethelwulf was buried in Steyning.

Now five miles from the coast, at the time Steyning was a busy port town and would likely have been of high political, military and economic importance.

Depite being fourth in line, with marauding berserkers on the rampage it didn’t take long for the crown to pass down to the youngest son, Alfred.

King Alfred was now the only hope for the Saxons in the face of Viking invasion.

Several years after his burial in Steyning, Alfred had his father’s body moved to Winchester cathedral. The original Anglo-Saxon church was later replaced in the Norman period with the church standing today. Aethelwulf’s gravestone is weathered and smoothed by time and any inscription is no longer legible. But the supposed tomb has (I believe) been dated back to the 9th century.

So, it’s far from certain this is the real gravestone, but we here at Odd Days Out are more than happy to go along with the idea, and pay homage to the old king at this lump of 9th century stone.

To my knowledge, no other royal has been buried in a small Sussex town. Alfred the Great was also interred in Winchester and it’s unknown where Aethelwulf’s first wife Osburgh was buried.

His second wife Judith of France, after having caused sensational scandal and political upheaval in Wessex, most likely died in Flanders, having fled a French convent with Count Baldwin of Flanders.

For my money, the life of Judith of France is far more interesting than that of her husband’s.

As Aethelwulf’s queen, she enhanced the role and status of future Anglo-Saxon queens, insisting on sitting with her husband. When he died, she then married his rebellious son Aethelbald, to the great consternation of the kingdom’s subjects and clergy. When Aethelbald soon died, she fled to France and was forcibly sent to a convent to become a nun for the rest of her days. She then fled with the count and where she then ended up is the subject of much speculation.

Her son with Count Baldwin eventually married Alfred the Great’s daughter (best not to think about that too much) and her descendent, Matilda of Flanders, was the famous wife of William the Conqueror.

I’m proposing the team here saddle up and go hunt for her grave in Belgium. I’ll keep you posted on developments.

Turning off the A27, Steyning is a only a 5 minute drive up the A283. There are several car parks just off the high street, all of which are free on Sundays. On the way in through a suburb we even stopped to pick up some beautiful flowers sold by a local.

St Andrew’s Church, is a 3-5 minute walk from the high street and close to Steyning museum. In time honoured ODO fashion, the museum was closed (the downside to Sundays). However right in front of the museum and easily missed you’ll find the Analemmatic sundial as well as an engraving of a famous poem by a local man sent to fight in the trenches. There’s also the ‘Steyning Stone’, the ‘Consecration Cross’ and memorials to religious martyrs.

Far too much for us to go into today, but there’s one thing we can’t leave without mentioning… 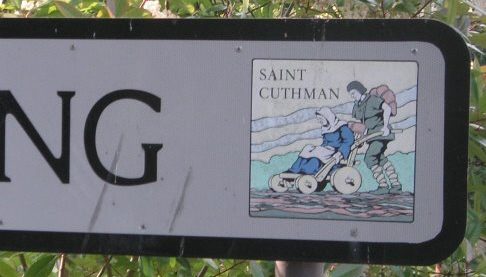 Legend has it that there was once a young shepherd boy who could keep his sheep in place by drawing a circle around them.

One day he put his crippled mother in a wheelbarrow and set off for greener pastures. On route, some haymakers began laughing at the strange sight – immediately, the heavens opened and rain destroyed their works.

Having travelled far and wide, the rope supporting the wheelbarrow eventually snapped. Cuthman decided to stop there and build a church on that very spot. While he was working away on the church, God popped down and gave him a hand. This church founded the town of Steyning and earnt Cuthman a sainthood.

Imagery of the strange legend of Saint Cutham and his mum can be found in various forms throughout Europe. But the peculiar image of a man carting an old women around in a wheel barrow is most prevalent in the town of Steyning: you’ll catch him on everything from statues to street signs.

St. Cuthman of Steyning: A Journey Through Time. Janet Pennington (1988).

She Wolves: The Notorious Queens of England. Elizabeth Norton (2008).