By: ODOmatt
In: East Sussex, Historical Footnotes, Once Existed
With: 0 Comments 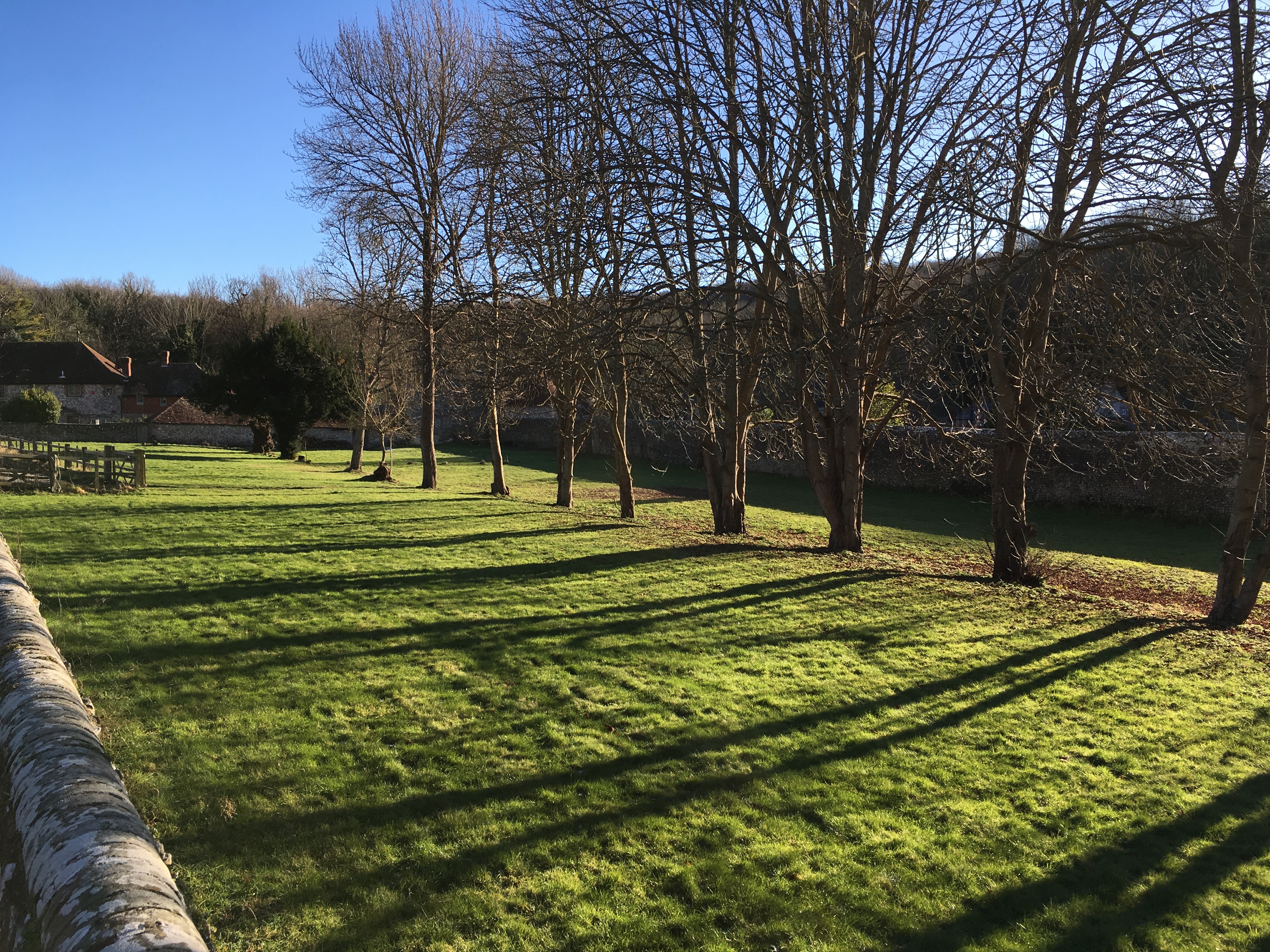 Did England’s greatest king once build a palace at West Dean? – Part of the Once Existed Project visited by ODOstefan, Darla and Matt on 3rd February 2019.

We’ve all heard of King Alfred: the 9th century king who defeated the vikings and united the English. He’s a figure shrouded in mystery and romanticism and an important part of his story lies in wait in a hidden East Sussex village. Sort of.

One of our many projects here at Odd Days Out is the Once Existed Project. These trips usually involve us traipsing muddy fields and dodging cows, imagining villages that no longer exist.

Last month, while exploring an extraneous extremity (The Old Pasonage – the longest continuously inhabited parsonage in the world), we unwittingly discovered a superlative Once Existed settlement: a patch of grass where a palace built by King Alfred may potentially have possibly once stood. Maybe.

King Alfred the great was born in 849 AD, the youngest of the four son’s of Aethelwulf. His family were the rulers of Wessex, an Anglo-Saxon kingdom encompassing most of southern England (You can findAethelwulf’s grave stone at nearby Steyning.)

As the other kingdom’s fell to waves of Viking invasion, Wessex became the last stronghold of the Anglo-Saxons. In an epic last stand at Chippenham, the vikings defeated Alfred and his brothers. They fled to the marshes of Somerset where they eventually regrouped and once again challenged Viking supremacy.

Over time Alfred took control of most of what is now England. He established fortified towns, unified the remaining Saxon kingdoms and brought a semblance of peace and prosperity to the people of England.

Unlike other kings from the dark ages, we know much about Alfred’s life thanks to a Welsh monk called Asser.

In 887 AD the two men met and became firm friends. Alfred ushered Asser into his inner circle of learned men where he assisted Alfred in his studies.

Most importantly, Asser became the king’s unofficial biographer, charting his life in the page turner “The Life of King Alfred,” published in 893 AD.

The Palace at West Dean

In the book Asser states, “I first saw him [Alfred] in the royal vill [mystery palace] which is called Dene.” This has led many to conclude that Alfred and Asser met at West Dean, Sussex.

Unfortunately, Asser didn’t see fit to specify exactly where in Sussex this royal “Dene” was. The subsequent internecine rift that ripped Sussex into East and West has muddied the waters further.

Getting to West Dean to investigate is no easy feat. As discussed in The Old Parsonage article, Google doesn’t want you to know about the village of West Dean (East Sussex) – instead aggressively trying to force you to go to West Dean (West Sussex). And herein lies the mystery.

Was Alfred’s palace in West Sussex or East Sussex? For sure West Dean, (West Sussex) has grown larger than it’s eastern counterpart, buoyed by the proximity of nearby Chichester.

But one thousand years ago the East Sussex village was on the banks of the Cuckmere river. This would have made an excellent naval and trading base for an Anglo-Saxon power.

Unfortunately, without major excavation at both sites, we can only speculate which village holds the crown.

If it’s true this is where Alfred met Asser, then West Dean will be one of the most important places in the early formation of England as we know it.

Unfortunately nothing physical remains of any palace, only whispers and rumour.

But, as well as exploring the supposed palace grounds, you can say hi to the smiling All Saints church. The church is a classic mix of Saxon, Norman and Victorian stone and building work – though there is further mystery in that some of the Saxon stonework appears to cover the later Norman works…

From the small pond in the centre of the village, head along the footpath that leads up hill through the woods. When you emerge at the top, a spectacular view of Cuckmere Haven awaits.

West Dean is located just east of Friston Forest, down a half-mile lane.

West Dean has limited parking, so we recommend you park in the forest car park and walk in to the village from there. That said, we did manage to park in the hamlet, albeit in a deep puddle in a muddy lay-by.

From Friston Forest Car Park, walk down ‘The Lane’ and until you reach the pond in the village centre. From here take a left and continue until you see the smiling church. The grounds are just opposite the church.

The nearby Seven Sisters Country Park and Cuckmere Valley are well worth a visit. As is the lost village of Lullington – investigated by the Odd Days Out team back in 2017.

The All Saints Church pamphlet