Three Mills Island – a secret no one should keep

By: ODObill
In: Art and Architecture, Events and Tours, London, Niche Museums
With: 0 Comments 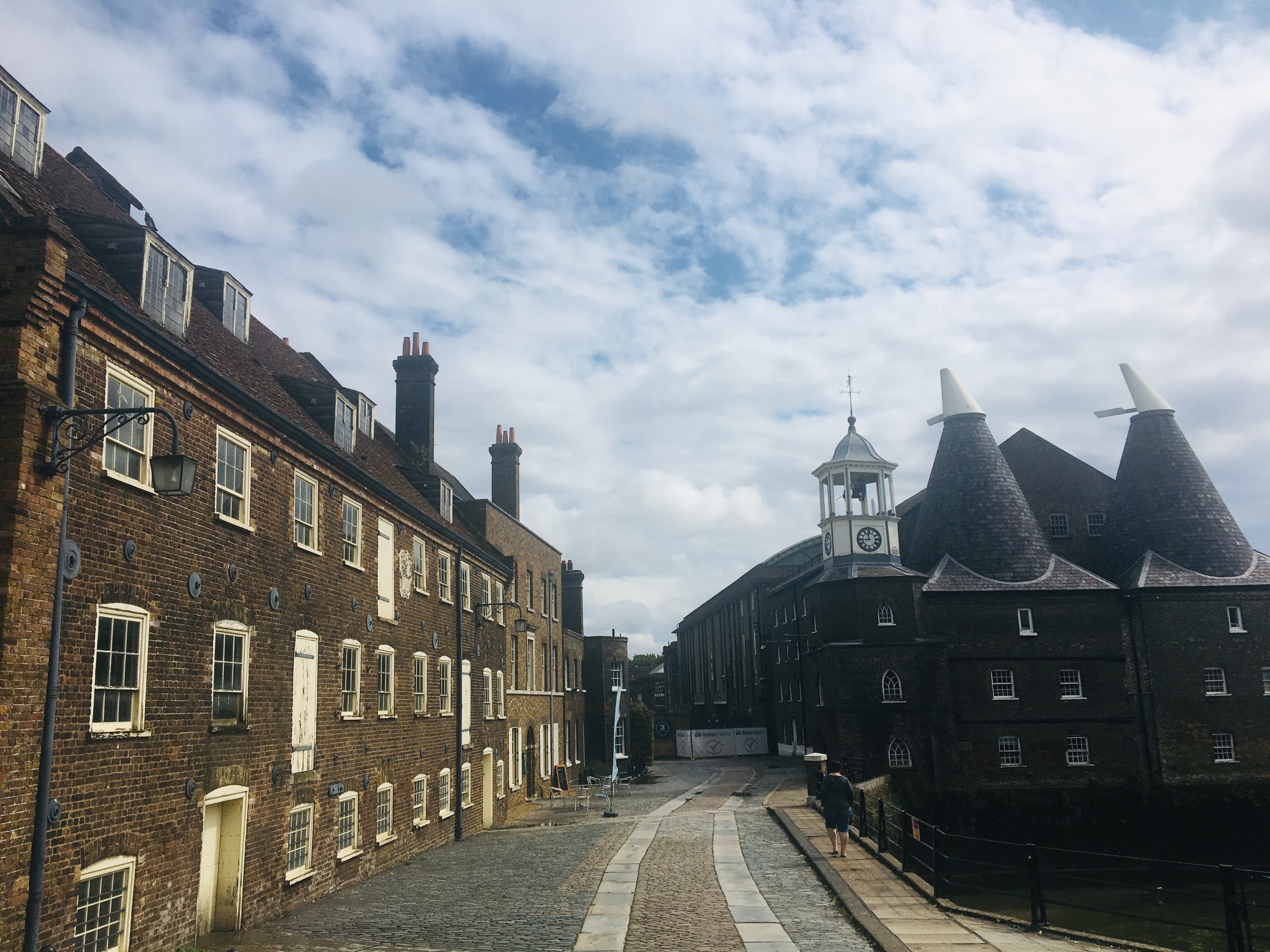 Three Mills Island is one of the earliest industrial locations in London. The Grade 1 listed buildings are located on the banks of the River Lea in the heart of the capital’s east end. The House Mill Trust offer regular tours of the House Mill which now functions as a café, a concert venue, an art gallery, and a unique wedding venue.

Odd Days Out has been to the site to find out more.

The tidal mills at Three Mills Island supplied the flour for London’s bread for over a thousand years. As far back as 1086, the Domesday Book recorded that there were as many as eight mills on the island. The foundations of the current House Mill date back to medieval times.

In many ways, the history of these mills is the history of London: they ground flour to feed London’s burgeoning population for a millennium; produced gunpowder in the sixteenth century to help fight the Spanish Armada; thousands of gallons of gin were distilled in the eighteenth century on the site during London’s gin craze; and the House Mill only stopped milling flour after sustaining heavy damage during the Blitz.

In the late twentieth century the distillery buildings were leased to Three Mills Film Studios, where some of the most famous films and TV shows today are made.

ODO regulars will need no introduction to tide mills, which harness the great power of tidal flows to turn millstones. Typically, a dam is built across a suitable tidal inlet and the tide flows into a mill pond through a one-way gate. When the tide is low enough, this stored water can be released to turn a water wheel.

The key difference with Three Mills is that instead of a reservoir of water, the river inlets above and below the site store the water.

Humans have built such mills since the Middle Ages but the ones at Three Mills are the earliest recorded tide mills in England. It is also the largest tidal mill in the world, although the water wheels are currently not in operation.

The current House Mill, built in 1776, is a magnificent Grade 1 listed Georgian building – although foundations on the site date back between 1380-1420.

It produced flour for over a hundred and fifty years until it suffered severe damage in the blitz. The House Mill Trust offers regular tours of the building every Sunday from May to November and at other times throughout the year. This fascinating tour gives you some idea of how it must have felt when the mills were working to full capacity.

You will see much of the machinery that was used to grind the barley and wheat and the ingenious ways that millers used both gravity and the tides to power the giant machines on show.

You can also see the giant water wheels that harnessed the river’s power to turn the massive millstones.

At its peak, the House Mill could grind about 2 tons of maize and 5 tons of barley per tide, rising to 10 and 14 tons respectively on spring tides. The average weekly throughput of the two mills was a staggering 125 tons per week.

The Trust hope eventually to restore the machinery, to perhaps produce artisan flour, and to generate some hydroelectric power.

Directly opposite the House Mill is the stunning Clock Mill which was rebuilt in 1817. Its weatherboarding and three storey drying kilns are reminiscent of the oast houses which are so characteristic of the Kent countryside.

As well as producing flour, the mills were used to grind barley, which was then used to distil alcohol; so the mills became a major supplier to the alcohol trade and gin palaces of London.

It made perfect business sense to distil alcohol on the same site as the barley was being milled, so distillers used some of the mill buildings to make gin.

The accession of William of Orange to the throne in 1689 lead to a massive upsurge in the popularity of gin. With Government support, the drink became a favourite with both the aristocracy and the new urban poor.

By 1743, the average adult in England was drinking 10 litres of gin every year. But soon the increased consumption led to a moral panic and in the 18th century a number of Parliamentary acts were passed to curtail this ‘dangerous’ trend.

But despite the changes in the law and moral disapproval, distilling on the Three Mills site continued. Throughout its early history, ownership of the distilleries and mills often changed hands. But in 1872 it was purchased by  J&W Nicholson & Co which incorporated its gin-distilling business onto the site. Production only ceased in 1941 due to war-time rationing.

Since the early 1980s, the old distillery site has become an important centre for film and television production. It has produced a number of famous movies ranging from Fantastic Mr Fox to Lock Stock and Two Smoking Barrels. It is also the home of TV’s Masterchef and the early seasons of Big Brother.

The Mill is at the start or end of The Line – London’s best outdoor modern-art walk. You can see ODO’s account of walking the Line here.

The House Mill fell into disrepair after the Second World War. But in the 1970s, when it was threatened with demolition to make way for a car park, a campaign started to preserve the site.

The site is now managed by the River Lea Tidal Mill Trust. It has redeveloped the House Mill and the site since the late 1980s. It also reconstructed the Miller’s House which had been demolished in the 1950s and is now the visitor information and education centre and a café.

As part of the redevelopment, the garden has been laid out to incorporate traditional kitchen garden plants and a herb garden.

But the future of the site is not yet assured. The Mill is made of wood, and sitting astride the tidal River Lea, it’s vulnerable to the elements.  The surviving machinery including the huge water wheels have not been used since 1940. The building remains on the Heritage at Risk Register.

The Mill House has often been described as one of London’s secret treasures. It seems to me that this has to change. The Mill has survived both history’s bombs and terrible planning ideas. It deserves to be better known and treasured by Londoners.

So why not visit one Sunday and see why the Mill and surrounding buildings merit a new lease of life? Who knows, with your help the mighty water wheels might start turning once more.

You can only access the House Mill through the excellent tours organised by the House Mill Trust. The tours take place most Sundays in summer. The 2019 Season is underway with guided tours each Sunday until the 24th November. You can find out more details at the Trusts website.

By London Underground & DLR: The nearest station is Bromley-by-Bow, which is served by the Hammersmith & City and District lines and is a 5-minute walk away. The nearest DLR stations are Abbey Road, Bow Church, Devons Road, Pudding Mill Lane and Stratford High Street. All are a 10-minute walk away

By road: From the Blackwall Tunnel Approach (A12), southbound, take the slip road (Hancock Road) to Tesco. No parking is permitted on the Three Mills Island but visitors may use the Tesco car park.

For further information about tours, events and news about the House Mill see the Trust’s website: www.housemill.org.uk/

2019-09-04
Previous Post: How Roys took over Wroxham and built the world’s largest village store
Next Post: Why I’m a big fan of the little Fan Museum