Tide Mills: unearthing the ‘Hamlet of Horror’ at the British Pompeii. 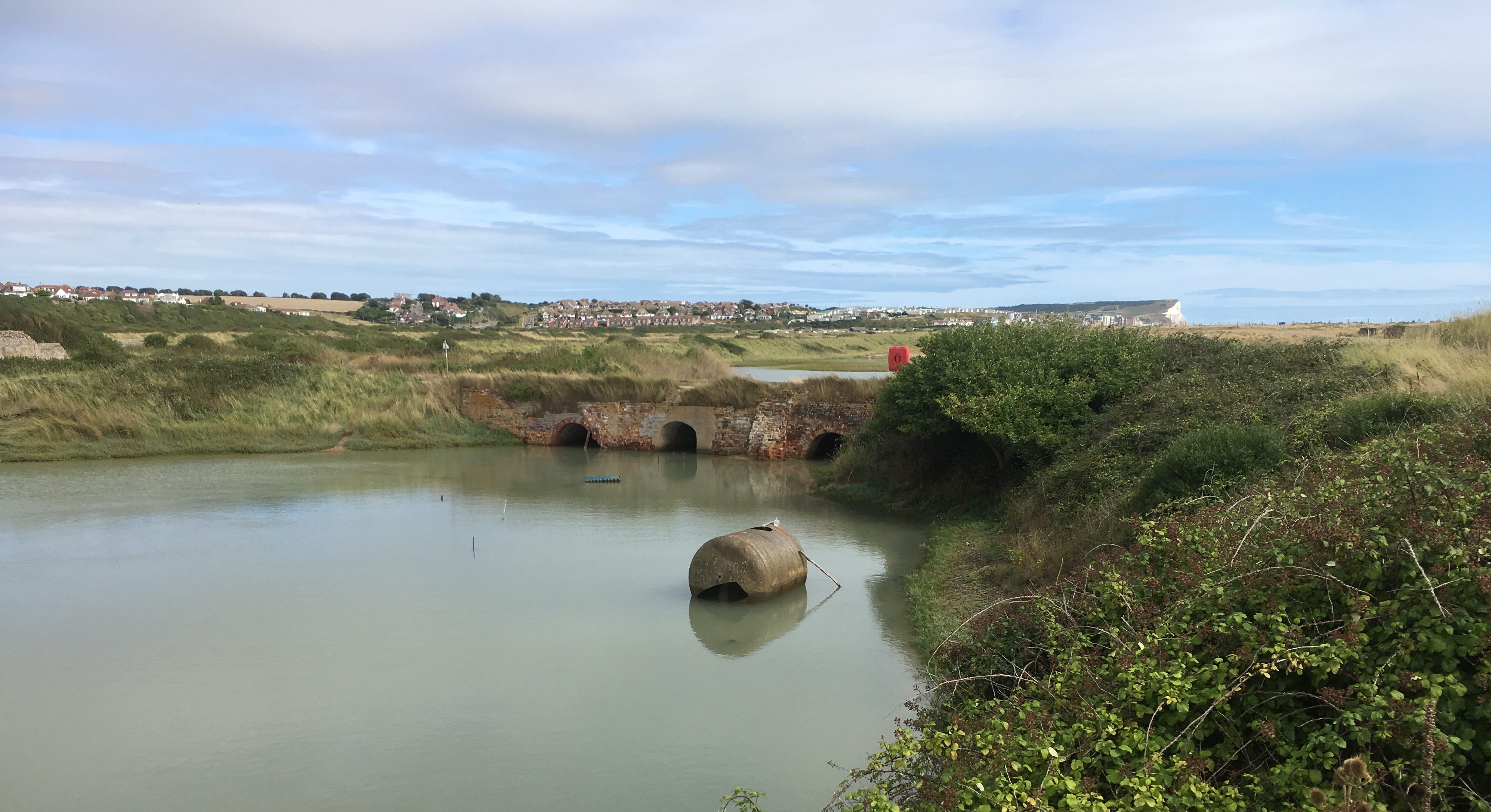 Part of the ‘Once Existed’ Project – Visited by the ODOstefan, Eloise, Darla, Theo, Rachel and Matt on the 11th August 2018.

This is the one we’ve been waiting for, the Holy Grail of lost villages and once existed settlements – Tide Mills truly is the Pompeii of the East Sussex coast.

‘Tide Mills’ refers to the tidal powered mill and village that sprang up east of Newhaven in the 18th century: one of only ten ‘surviving’ tidemills in the UK.

A goldmine of abandoned buildings, the story of Tide Mills is one of mutiny, war, nightmare bosses, high-quality milling and seaplanes.

The three-star google-rated car park (just off the A259) is the perfect spot to park up – a short walk from Tide Mills and free to boot. Google reviewers just recommend that you don’t leave valuables in the car. Every cloud.

We came out in full force for this Odd Day Out and began by making our way out of the car park and up Mill Drove towards the sea. After a perilous train track crossing, we examined the excavations of flattened cottages as we approached the ruins of the seafront mill and hospital. 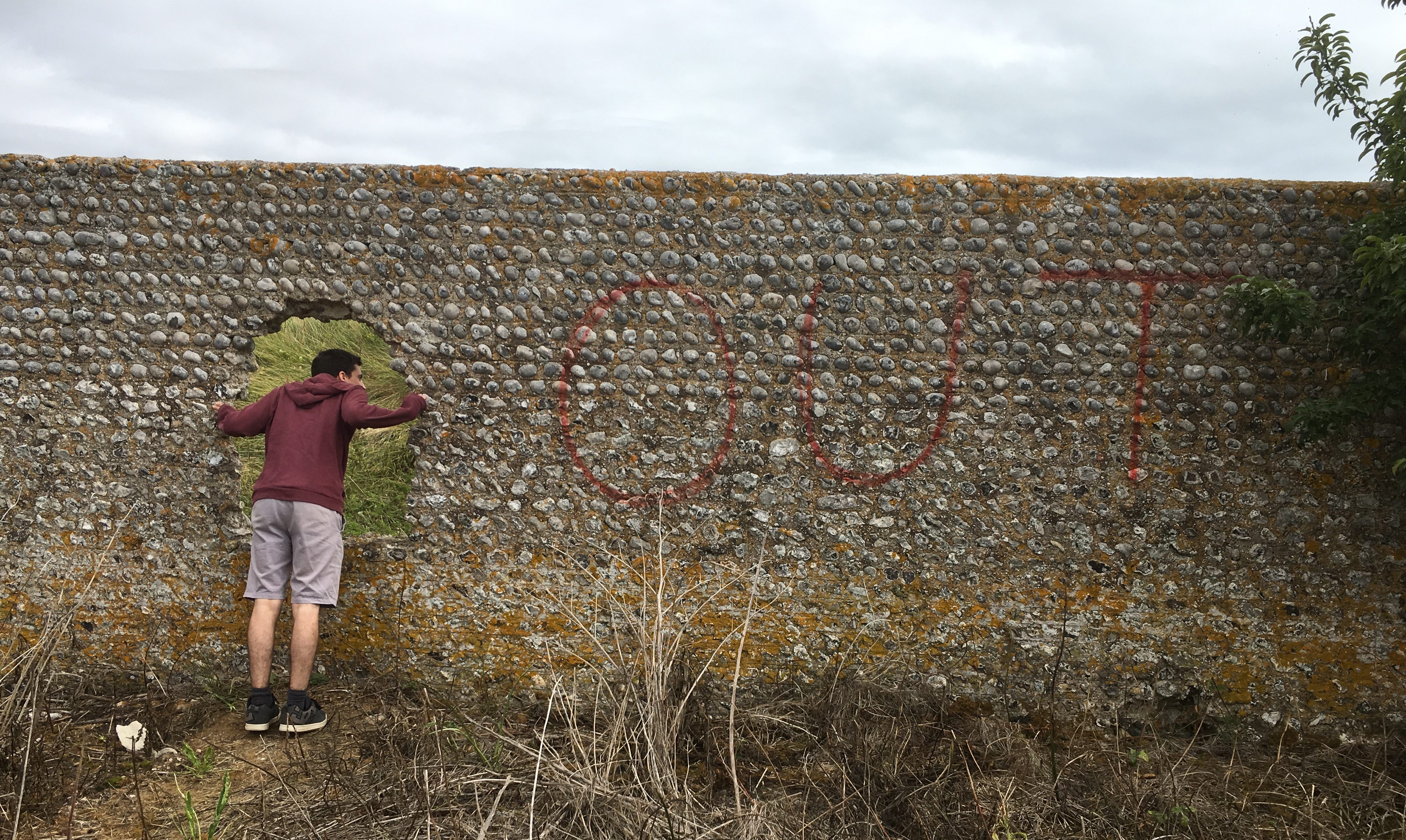 Since 2006 the Sussex Archaeological Society has been busy surveying, excavating and drawing together the various strands of history from this unique site. Their historical panels provide excellent information to visitors along the route.

Although we do love traipsing through muddy fields trying to imagine a plague ridden village, it was quite extraordinary to visit a veritable Pompeii of ruins.

Except, whereas the Italian city was frozen in time one terrible day, the diverse history of Tide Mills stretches from the Georgian period right through to World War II. So if anything it’s better, really.

The Rise and Fall of Tide Mills

The changing course of the River Ouse, as it cut a new path closer to Newhaven, led to a shingle build up and the forming of a tidal creek at the spot that would become Tide Mills.

In 1763 the land belonged to the soon to be Prime Minister, Duke Thomas Pelman. Three enterprising corn merchants (John Challen, William Woods, and John Woods) snapped up a lease, recognising the site’s potential. Once established, the mill was producing 1.65 tonnes of wheat per week, which was transported up river to Lewes, or by sea to London.

The mill was then bought in 1791 by Thomas Barton for £3,000. In 1795, bored of awaiting French invasion, some grumpy and hungry soldiers, stationed at nearby Seaford, mutinied and stole 200 sacks of flour from Tide Mills.

The marauding militia was suppressed by soldiers from Brighton, and the ringleaders were hanged in Hove for their crimes.

By the early 19th century, Tide Mills was flourishing under the stewardship of one William Catt who took over the mill in 1808.

A thriving village was home to a community of 70 people and there was also a carpenters, blacksmith and granary. He even expanded the grinding stones from four to a world beating sixteen, becoming the unrivalled king of global milling.

Despite – or perhaps because of – his impressive business skills, Willie was something of a disciplinarian, ruling the roost with an iron fist.

He once lay in wait to catch workers breaking the 10.10 pm curfew. He punished them by withdrawing beer rations and banned them from leaving the village for a month. It seems he wasn’t just their boss and landlord, he also told them when to go to bed.

But the golden age was not to last long and towards the end of the 19th century trouble struck Tide Mills: Wille C dies in 1853; the new railway line to Seaford makes it cheaper for farmers to sell their flour further afield; and as if that weren’t bad enough, a huge storm damages the mill and causes flooding.

In 1883 the mill machinery gets sold off and in 1901 the mill itself is demolished.

But the story doesn’t end there.

The villagers stayed on after the destruction of the mill, working local farms or in the nearby towns. A radio relay station was built in 1906, as well as a seaplane base to fight the threat of submarines in the First World War.

Captain David Dale then built a racing stables in the early 1920s, only to see his daughter elope with one of the stable boys.

In these stable ruins the ODO team found a sign post which challenges you to find the horse drinking bowl. Needless to say, after a good five minute hunt – mission accomplished.

More striking than the stables are the ruins of the Chailey Heritage Hospital built in 1924. A residence for boys with disabilities to recover after an operation – the perfect place to get some of that healthy sea air.

We spent a good while searching for the nurses wing foundations, sadly to no avail.

As time marched on, the village did not.

In 1937 a typically restrained article from the Daily Mail ran with the headline ‘The Hamlet of Horror‘, and described the squalor in which residents lived and the complete lack of running water, sewage facilities and electricity. Later that year Seaford council passed a relocation act, resettling the villagers in the town.

A local myth suggests that the village was then used for artillery target practice. However, in actual fact, during the Second World War Tide Mills was sequestered for military training and became a Canadian base where they drilled street fighting exercises. By this point the village was completely deserted and its two hundred years of prosperity were finally over.

Tide Mills is a rip-roaring journey through time and by far one of the most exciting lost villages in all of south east East Sussex.

Back at the carpark, by a stroke of luck, there had been no carjackings and we left with a colourful piece of history in our hearts and – having scooped up a tiny piece of loose brickwork – in our pockets.

Situated between Newhaven and Seaford, heading towards Seaford on the A259, take a right about half way onto Mill Drove for the carpark. It’s then a short walk, over the railway line, towards the seafront.

After sampling the delights of Tide Mills you can enjoy a stroll along the beach with cliff and downs views or head to Newhaven Fort for some more historical action.

Lost Britain: An A-Z of Forgotten Landmarks and Lost Traditions by David Long (2015)