A Tour of the Rampion Offshore Wind Farm

By: ODOmatt
In: Uncategorized
With: 0 Comments 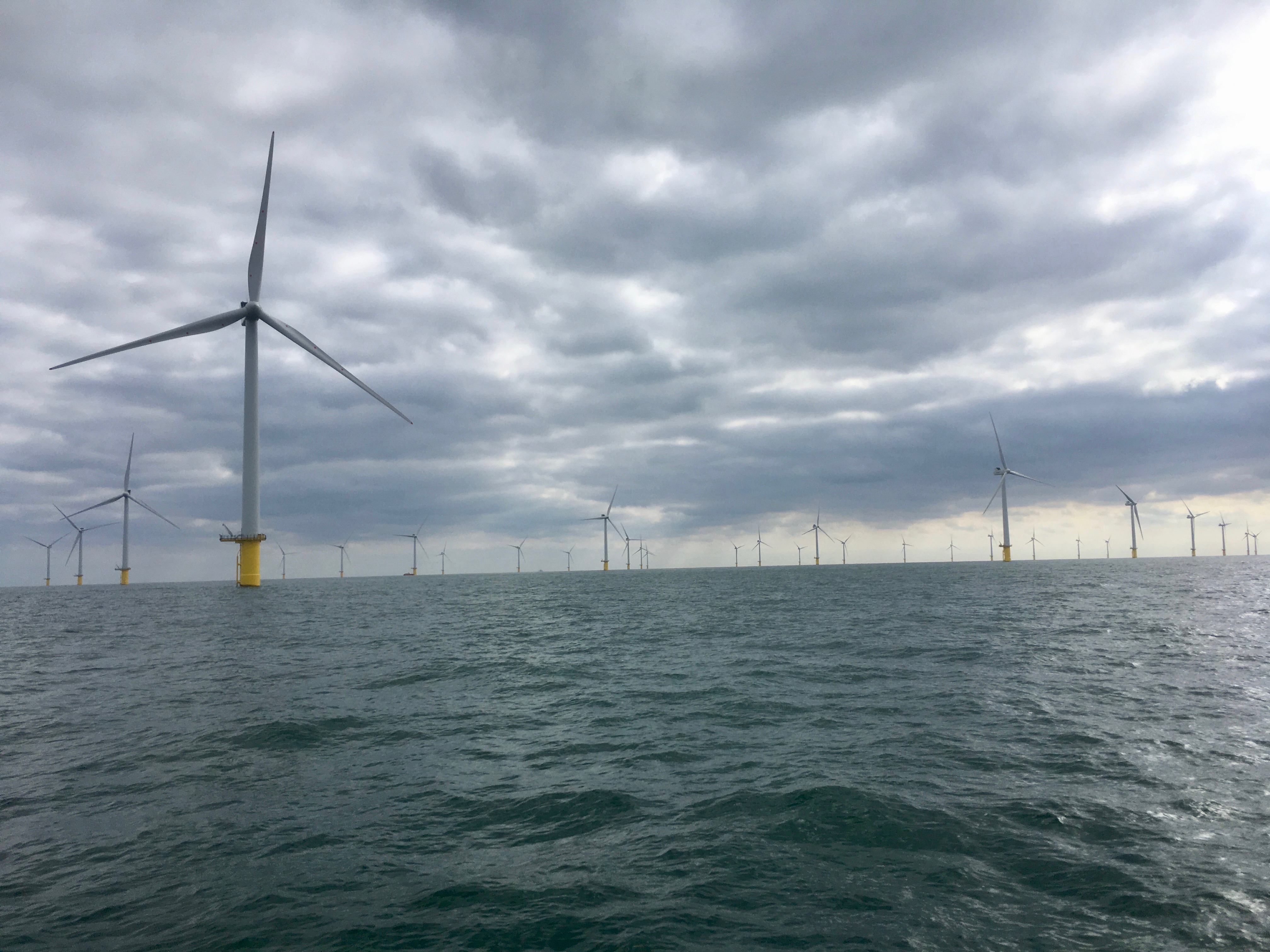 Any day-tripper to the Brighton coast can’t fail to notice the horizon’s newest edition – eight miles out in the channel, the colossal wind turbines of the Rampion Offshore Wind Farm stoically face the shoreline.

Since 2017, the 27 square mile wind farm has been supplying the national grid and now the public can hop on a boat for a close up tour. (See details below for how to book a visit.)

My trip out from Brighton Marina to the wind farm took close to an hour, all the while battling the currents and wind.

Slowly but surely, the true stature of the turbines was revealed as we crept closer to Rampion, the farm eventually engulfing our little boat. We spent the rest of the tour gently weaving in and out of the towering turbines – a truly surreal Sci-Fiesque experience from the back of an old fishing boat.

There are 116 turbines at Rampion, each 80m high with 55m long blades and weighing 200 tonnes.

After a green light from the government, three years of construction, and a total spend of £1.3 billion, the Rampion Offshore Wind Farm now has a lifetime output potential of 400MW of electricity – enough to supply 350,000 homes and reduce C02 emissions by around 600,000 tonnes.

During our voyage, the boat chugged across the farm for around 45 mins, circling the mightily impressive offshore substation.

This is the most complex part of the farm, assembled over two years in Rosyth in Scotland. The turbines send their electricity to the substation, which then transforms the energy to 150kv (from 33kv), and forwards it onward to the land.

Way back in 2010, energy giant E.ON were awarded rights to the development.

Of the nine ‘zones’ under consideration in the South East, the Brighton and Worthing site was finally selected, with Hastings narrowly missing out. Once that was settled, it was shifted again after local consultation – so as to avoid a popular fishing route and a nearby heritage coastline.

E.ON also considered different numbers and sizes of turbines. Finally, they selected the 116 80ft turbines and Rampion was ready to go.

The laying of the onshore cables began in September 2015 and offshore work began in February 2016. By November, all the foundations (the yellow bits) were completed and in September 2017 the last turbine was up and running.

That November it first began contributing to the national grid.

The onshore cables travel 27km from the sea to a substation at Twineham, which magically converts the electricity to a higher voltage, before feeding it in to the adjacent National Grid substation at Bolney.

Incredibly, the project came in massively under budget at £1.3 billion: the original estimated construction cost was £2 billion.

In 2010, the corporate PR department at E.ON masterfully killed two birds with one stone (nothing to do with turbine blades). They launched a competition among local schools to name the farm, thereby winning community support for this dramatic seascape transformation, while saving themselves the headache of coming up with a name.

Pupil Megan McCullough, from Davison High School, won with her suggestion of the county flower of Sussex Phyteuma orbiculare (aka The Pride of Sussex, or the round-headed rampion.)

Canny mariners have taken advantage of the farm to offer trips to a curious public. Below are three of the most popular operators.

All trips are weather dependent and last around 2-3 hours. They depart from Brighton Marina.

ODO went on a 120 minute tour with Ross Boats. Slightly cheaper than their main rivals, Ross have a two boat fleet, ‘Adept’ and the fishing boat seconded for ODO ‘Voyager’.

Brighton Diver has two 11m catamarans and can take you on 2 hour trip. They have a PA system with the guide giving information of the farm. The boat returns via Hove, passing both piers close up.

Channel Diving offer a trip on their 12m purpose-built catamaran. This trip also includes a slow cruise back to harbour along the Brighton coastline.

E.ON hold 51% of shares and run the site on behalf of the other shareholders. The rest are divided among Enbridge (a multi-billion dollar Canadian oil and gas company), and the Australian Macquire Group investment fund.

These aren’t exactly the names that spring to mind when you think ‘green’ and ‘environmental’, but green energy is increasingly competitive and profitable.

Wind Power in The UK

The UK is the world leader in wind energy: wind already powers the equivalent of 4.5 million UK homes.

In 2016, wind generated more power for the National Grid than coal for the first time, and in 2018 it overtook nuclear power. Overnight, on March 17th 2018, wind was providing almost half of the country’s electricity.

So far in 2019, zero-carbon emitting energy overtook fossil fuels for the first time since the industrial revolution.

As of 2019, there are 9,851 wind turbines in the UK, with a total installed capacity of over 21.4 gigawatts. Mostly, this is contributed by onshore turbines, which are currently more efficient than offshore (as energy is lost in transit from the sea). The Whitelee Wind Farm, near Glasgow, supposedly provided nearly 90% of Scottish home energy needs last year and there are plans to create a football pitch size 50MW battery to further improve the farm’s efficiency.

While the conservative party have committed the UK to net-zero carbon emissions by 2050, they have pledged to not fund anymore onshore wind farms, notoriously unpopular among their grassroots base. The government established a £100 million investment fund this year for an ‘Offshore Wind Growth Partnership’ to encourage more investment in offshore power.

Some people aren’t so happy about Rampion.

Simon Konecki, American businessman and husband of Adele, is furious at the “scars” Rampion has left on the South Downs. An angry Youtube video from his eco-water company ‘Life Water’ outlines what it claims is ecologically damaging behaviour from E.ON. It suggests onshore cables should instead have gone under Lancing, rather than through the Downs.

Many (including local Green MP Caroline Lucas) have responded sceptically to Konecki’s charges and E.ON have claimed any damage is temporary, having worked with Kew Gardens to preserve and replant any damaged flora.

Other critics have attacked the burden on our energy bills and national budget from green investment subsidies. However, this criticism is often criticised by other critics.

We’re pushing beyond Odd Days Out’s remit here, but one thing we do know is that a tour of the Rampion offshore wind farm is not to be missed.

2019-07-17
Previous Post: A muggle’s guide to Diagon Alley
Next Post: Prime Minister’s Question Time: How To Get A Front Row Seat