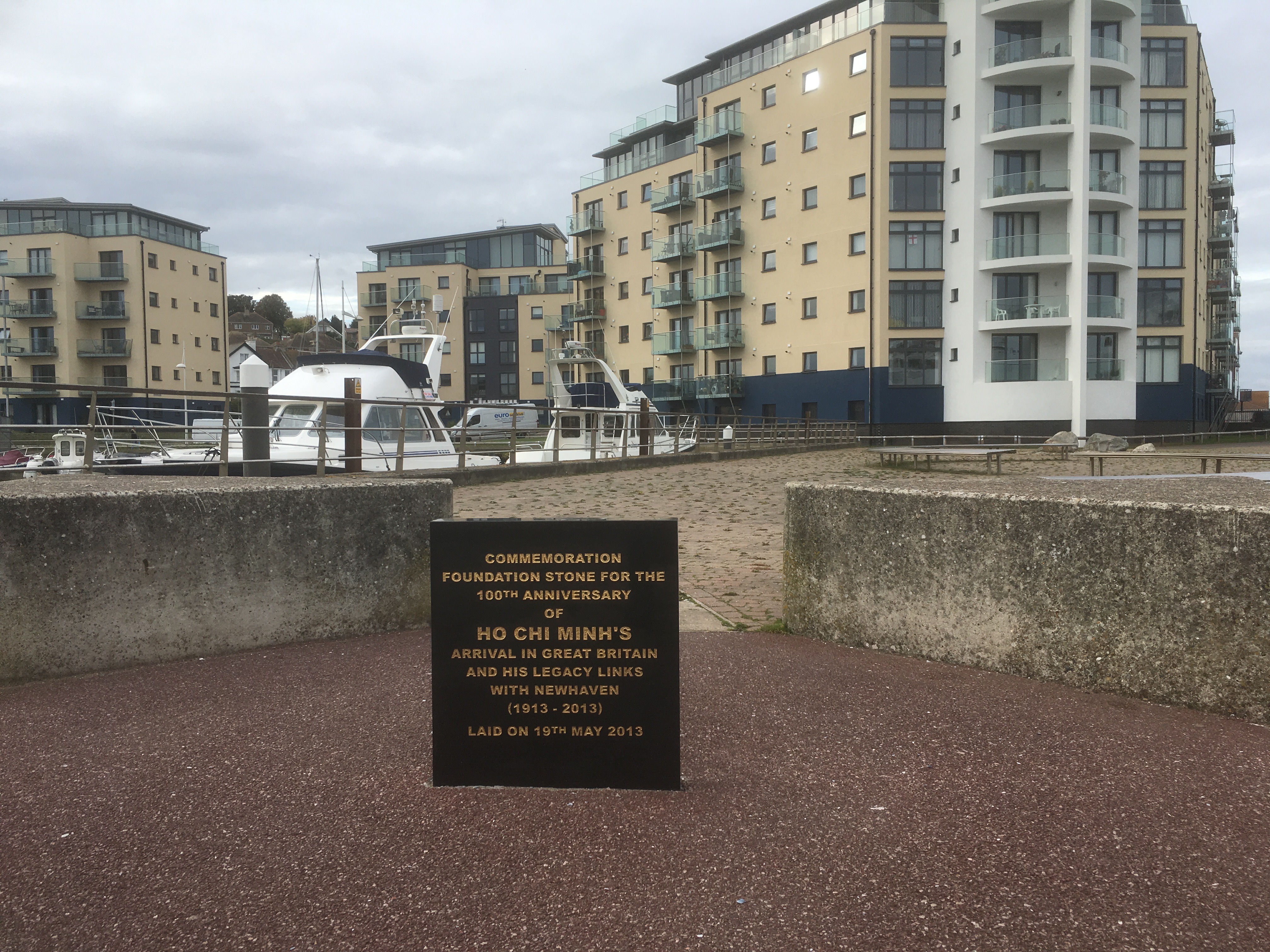 Located between Eastbourne and Brighton, the small industrial port town of Newhaven has it’s fair share of peculiar history, but none more so than an unlikely visitor in 1913…

Before becoming the leader of the world’s most fierce resistance force, Ho Chi Minh cut his teeth working as a pastry chef on the Newhaven-Dieppe ferry line.

The town hit national headlines in 2013 when it announced controversial plans to commemorate the famous visitor with a small centennial commemoration stone. Thankfully for all Sussex-based Odd Day Outers, the stone got laid.

Ho Chi Minh (affectionately know as ‘Uncle Ho’) was born 19th May 1890 in the village of Kim Liên, in northern Vietnam. In his youth he joined the fight against the French colonisers as part of the Viet Minh communist rebels.

After a brief pause during WWII (which saw Japanese and then British occupation), Ho and Co. eventually pinned the French down in the fortified town of Điện Biên Phủ in 1954.

The French called in their American friends for help and Uncle Ho went on to lead the charge against the U.S.A and the Republic of Vietnam, in one of the most notorious wars of living memory and the biggest humiliation of U.S military history.

Ho eventually passed away on the 2nd September 1969, having united Vietnam and freed his country of foreign occupation.

His body is now on display at the Ho Chi Minh Mausoleum. I can still vividly recall my frustration when, on a rainy Hanoi day, I tried to visit on the only day of the week it was closed.

In 1911, at 21 years old, Ho got a job as a kitchen porter on the Amirale de Latouche-Tréville, which set sail from Siagon to Marseille.

Ho applied for school in France but was rejected, so he hit the open seas and travelled the world. It’s thought he may have spent a few months living in New York and Boston, working as a baker.

Ho’s time in the UK extends beyond Newhaven; he claimed to have lived in Crouch End and Ealing in London. He also claimed to have trained as a pastry chef at the Carlton Hotel in Westminster, under the famous French chef Auguste Escoffier.

Now, I know what you’re thinking: “This sounds mad. How can it be true?” And, unfortunately, your cynicism may prove correct.

Many of Ho’s claims cannot be corroborated, and it’s possible he exaggerated his adventures abroad: after all, this wouldn’t be the last time a 21 year old’s gap year bragging would prove pure fantasy.

And, sadly, this dubious doubt must extend to Uncle Ho’s time in Newhaven too.

According to a BBC article, the scholar and biographer Sophie Quinn-Judge is sceptical about the Newhaven story but concedes, along with other academics, that it was indeed possible he visited Newhaven.

But all that doubt didn’t stop the good councillors of Newhaven and the High Sheriff of East Sussex from inviting Vietnam’s UK ambassador, Vu Quang Minh, to the unveiling of the commemoration stone on 19th May 2013, Uncle Ho’s 123rd birthday.

Vu then presented the town with a three-foot bronze statue of Ho Chi Minh and two framed photographs.

The ambassador in return received a framed photo of Newhaven port, a photo of the ferry, and a lovely pair of cufflinks.

In 2015 there were plans to erect a statue of Uncle Ho as part of a design competition launched by the ambassador. The Vietnamese Community of the USA wrote a letter to Newhaven council to object to “the Evil Ho Chi Minh’s Statue.”

“While it is a laudable aim to want to promote international co-operation… I do not believe that given the importance of using money to regenerate the area that a statue of a deceased Communist dictator should be a priority for the town council.”

Famously, it was during his time in Europe that Ho’s revolutionary, marxist ideals fomented, and he eventually returned home and changed the world.

We’ll never know the full extent of his European wanderings, but there’s a small piece of the puzzle waiting to be explored next to some high-rise new-builds on the shorefront of Newhaven.

From the West Quay car park it’s a short walk along the river to the edge of the West Quay where you’ll find the stone. You can’t miss it. Well, you can. But try not to.

You’re not far off another top odd day out – Tide Mills. This abandoned village was described by one visitor as “the Pompeii of South-East England.” Yes, that may have been me, but after you’ve seen the old sluice gate, you’ll know why!

The town is most famous for the 19th century Newhaven Fort. You can also admire the huge ships, traipsing in and out of the harbour, or hop on a ferry to France and retrace the steps of old Uncle Ho himself.