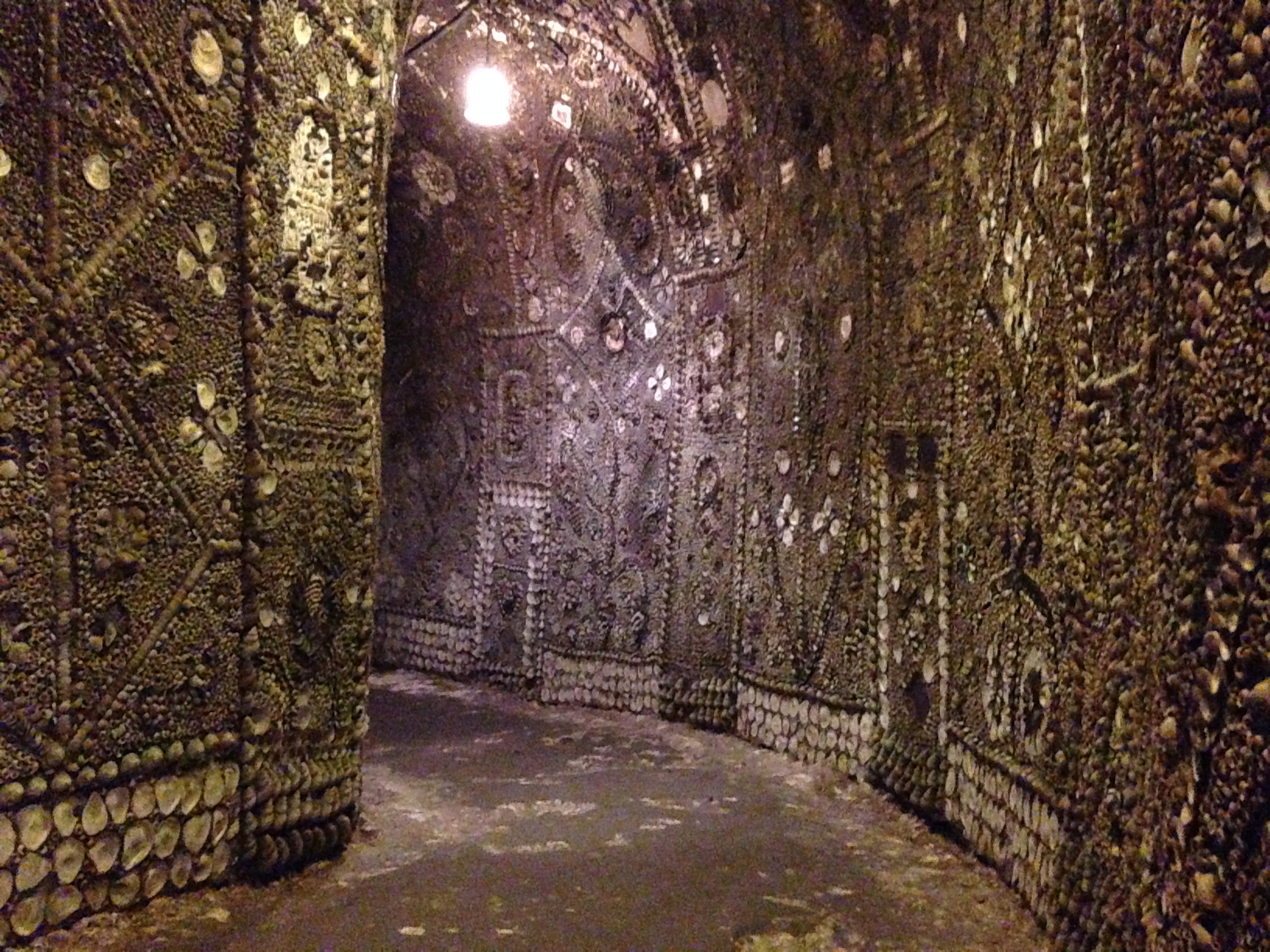 Discovered in 1835, the Margate Shell Grotto remains one of Britain’s biggest mysteries – a collection of subterranean mosaics, of unknown origin, made out of millions of sea shells.

Secret pagan temple or the work of an eccentric gentleman? A trip to Kent isn’t complete without a stop at the enigmatic Margate Shell Grotto.

On a short weekend stay at the disarming tudor town of Sandwich (around the historic heart of the Cinque Ports), there wasn’t much that could be described as ‘odd’. So it was only right that I headed north for a day in the grittier Margate, the holiday destination of choice for rich Georgian gentry.

For the most part, Margate is your typical British seaside town. The divisive, head-turner Arlington House looms over the town – a gargantuan slab of brutalism, loved by some and hated by many.

A recent hipster renaissance, however, has seen cafes, galleries and vintage clothes shops popping up in the old town. The beachfront Turner Contemporary gallery exhibits world class art in a town that, in other circumstances, may well have been abandoned to the changing winds of economic fortune.

Heading inland, away from the resurgent seafront, you’ll find the mysterious, intriguing and downright odd (most importantly) Shell Grotto.

There is no end of speculation about its origins, but ultimately no one has a clue who made it, when it was made, or for what purpose.

Entering the glass-fronted building, passing the shell-strewn gift shop, and parting with £4, I descended into the chilly Grotto below.

Through winding tunnels, hypnotic swirls of shells stretch from floor to ceiling and lead you through to a final ‘altar’ room.

The official visitor map attempts to shed some light on the abstract designs; I could just about make out the ‘Ganesh’ panel, as well the ‘phallus’ mural and ‘tortoise’ design, but the rest were beyond my imaginative capacity.

The altar room has a wall missing, destroyed by an aerial bomb during World War II. At the time, this destruction supposedly revealed hidden turtle bones buried behind the wall – a rumour yet to be corroborated.

But what’s really going on here…

Appropriately for the mysterious grotto, even the story of it’s discovery isn’t straightforward.

The official line is that in 1835 Mr James Newlove (of Belle Vue Cottage) lowered his son Joshua into a hole he found while digging a fish pond. However, decades later Joshua’s sister Fanny described how she and her brother had really found it years before, but didn’t dare tell their father!

During my visit, the affable member of staff behind the till recounted how a private girls’ school and Dune House Academy, a boy’s school, used to surround the site, and it was possible children from these schools were the first pioneers.

What is clear is that no one had ever heard of it before.

On 22nd May 1838, the Kentish Gazette announced the opening of the Grotto to the unsuspecting public. Since then, debate has raged about just who made the Grotto and why.

Many have speculated that it’s nothing more than a gentleman’s ‘folly’. (Check out our ‘Folly Watch’ section for more on follies.)

Particularly prolific in the Victorian and Georgian periods, it was not uncommon for rich, bored men to splash out on unnecessary, elaborate constructions – be it huge towers or, indeed, decorated grottos.

With gentlemen of leisure often returning from trips to Italy and Greece – where shell decorations were popular – the fashion for such designs reached fever pitch in Britain around the time of the Margate discovery.

The Margate Shell Grotto was never below the private grounds of a manor house, where you would expect to find such follies. Furthermore, these follies were usually made expressly to show off to other people, or were at the very least recorded in some form.

It’s unlikely a gentleman of leisure would build such an extravagant spectacle under a public meadow or by a school, and then take the secret to his grave.

On top of this – your honour – the fashion at the time, much like in taxidermy, was for bright, exotic specimens. But at the Margate shell Grotto, practically all of the shells are local, mostly originating in Margate with some from Southampton.

The exotic highlights of the grotto are two queen conches from the Caribbean and some giant Indo-Pacific clams, which form the centre piece of two designs in the altar room.

And then there are H.G. Wells’ long-lost, vanishing turtle bones, of course.

Although the shells can be traced to a location of origin, the mosaic at work can’t be dated. It could be victorian, medieval or prehistoric. Take your pick!

The member of staff with whom I chatted seemed keen on the Romans as culprits.

The work of satanists, the Knights Templar, Romans, pagans, a message from our alien overlords, or an underground religious cult – within the abstract shell patterns any theory can find the requisite network of cryptic symbolism to back it up.

Perhaps its just a piece of pretty folk art with no hidden meanings. Or an elaborate hoax that missed its ‘gotcha!’ moment.

It’s impressive that the Shell Grotto is abstract enough to incorporate such a diversity of speculation. I’d like to throw ‘highly unlikely natural phenomenon’ into the ring.

Until historians dig up some illuminating dusty document, the perfect silence on the subject pre-1835 means the Margate Shell Grotto will remain a complete mystery.

As I walked through the tunnels, I imagined how cathartic it must have been, sitting there hour after hour in the dark, sticking shells to the wall in silence.

In a way, I hope whoever spent those happy, poignant hours creating this magic world remains forever unknown. The real magic of the Margate Shell Grotto is in the mystery.

I parked at the Trinity Square Car Park then meandered down hill on a simple 5/10 minute walk to the Grotto. On this route you’ll pass another Margate historic attraction on route – the Tudor House.

The train station is on the other side of town but it’s a fairly straightforward 20 minute walk which passes by the bay as well as the above mentioned Arlington House.

Also in the area

On the way back to town, stop off at the Tudor House. Don’t miss the Turner Contemporary (free admission) and be sure to take a stroll through the old town.