By: ODObill
In: Art and Architecture, Historical Footnotes, London, Uncategorized
With: 0 Comments 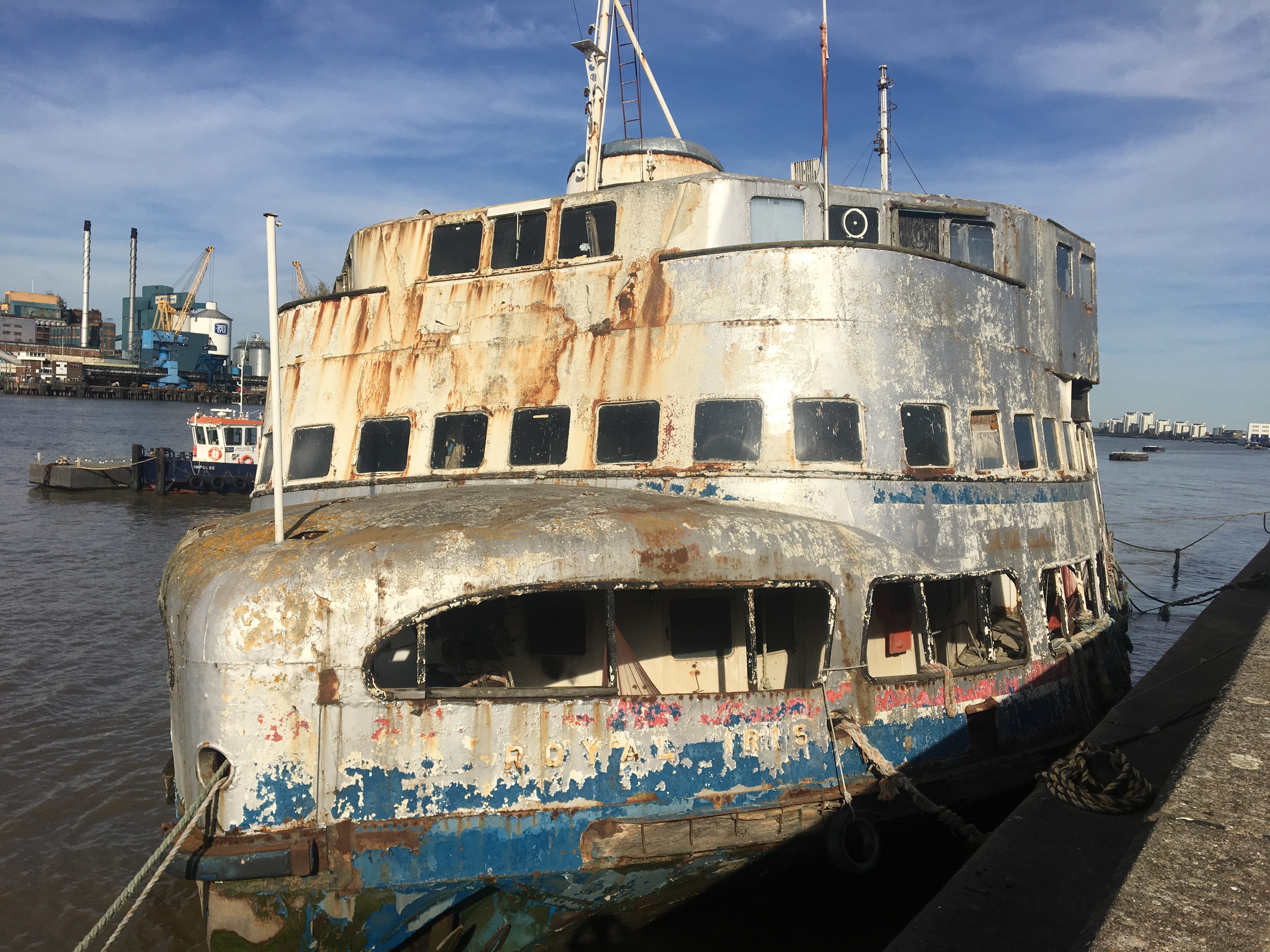 Well that was me, Royal Iris, on the river
Mercy beat n’ with the band, that was me

Few people who pass by what’s left of the MV Royal Iris in Woolwich realise the important role the boat played in the cultural history of Britain and the world.

The ship has been moored by the Thames Flood Barrier since 2002, seemingly left to rot. But for most of the preceding fifty years she was at the centre of cultural life in Liverpool and played an important role in the development of the Merseybeat scene and the emergence of the Beatles.

The Royal Iris served as one of the iconic ferries and cruise ships on the River Mersey from 1951 until 1991. She was built in Dumbarton in 1950 and originally painted in the green and cream colours of the Wallasey Corporation.

She was fitted out in some luxury, with a dance floor and stage, tea room, cocktail bar and even a fish-and-chip restaurant. This last feature led to her becoming affectionately referred to by locals as the Fish-and-Chip boat. The Iris soon became a well-loved part of Liverpool’s lively social life.

Just weeks after its launch she ran into trouble with the local constabulary. Plain-clothes police officers witnessed drinks being served during a cruise after 3pm. But when they approached the Captain to report what they had seen, he used his maritime rights to have the Chief Inspector arrested and locked him in the cabin, releasing him only after the ship had returned to port.

The Royal Iris and the Cavern Club

But it is the on-board concerts that really cement the Royal Iris’s place in history. In 1961 Ray McFall, the owner of the legendary Cavern Club, organised a series of concerts on the Iris known as the Riverboat Shuffles. Many of the biggest names of the emerging Merseybeat scene appeared, including Gerry and the Pacemakers. But most importantly, the Beatles played four concerts on the Iris between August 1961 and September 1962.

For the first three concerts the Beatles had second billing to Acker Bilk (twice) and Johnny Kidd and the Pirates. But by the time the band played the last of their gigs, they were topping the bill.

Acker Bilk remembered: “The boat used to go down the Mersey a bit and out in the channel and The Beatles did our interval spots. They wore black leathers and I liked the tunes they played”

The Beatles’ then drummer, Pete Best, later recalled “It was a great night as the cabin at the back of the stage was crammed with beer and we had a great drinking session with Acker and his band.”

As the Beatles went on to conquer the world, a new chapter opened in the life of the Royal Iris. In 1972 she underwent a major refit and was given a resplendent new blue and white livery and a new steak bar and dining area to replace the old fish-and-chip shop. From then on, she was used exclusively as a cruise ship.

Royalty on the Royal Iris

The Royal Iris lived up to her name in June 1977 when she carried the Queen and the Duke of Edinburgh on their Silver Jubilee Mersey Review.

London calling for the first time

The Royal Iris’s first trip to London in 1985 was a proud affair. She made a 1,500 mile round trip to London on a publicity drive for Liverpool. Her tour took her around Lands End, up the Thames and under Tower Bridge before mooring next to HMS Belfast.

The leaving of Liverpool

Faced with mounting costs to keep the old boat seaworthy, Mersey Ferries decided it was time to let her go. So the Royal Iris was sold in November 1991 to a Liverpool consortium who planned to convert her into a floating nightclub and conference venue. But in 1993, it was announced that the Iris had been sold again and would now become a floating casino in Cardiff. The Royal Iris left the River Mersey for the last time on 12 August 1993.

It later emerged that the mooring charges had not been payed in Cardiff, so the boat was sold again. After various failed schemes, she was brought to London and moored close to the Thames Flood Barrier in 2002.

The last 17 years have not been kind to this once-proud boat. She has been left to rot, unloved and uncared for. But even today, visitors can still catch a glimpse of her style and beauty beneath all the rust. The peeling paint and rotting timber add a fascinating and oddly beautiful sheen to this relic.

Various campaigns have been launched over the years to restore the Royal Iris to its former glory. All have come to nothing. The boat is now so far gone, it is difficult to see her ever being restored. It seems a sad end to a fascinating life.

The Royal Iris is moored on the southern bank of the Thames just east of the Thames Flood Barrier.  The best way to see it is from Harrington Way, off Warspite Road, SE18 5NR.  Its part of an industrial estate and there is plenty of parking.

Underground North Greenwich on the Jubilee Line is the nearest tube station.

2019-10-02
Previous Post: Why I’m a big fan of the little Fan Museum
Next Post: Well Dressing – a Peak District tradition