Framfield Footpath Nine and the battle for walkers’ rights 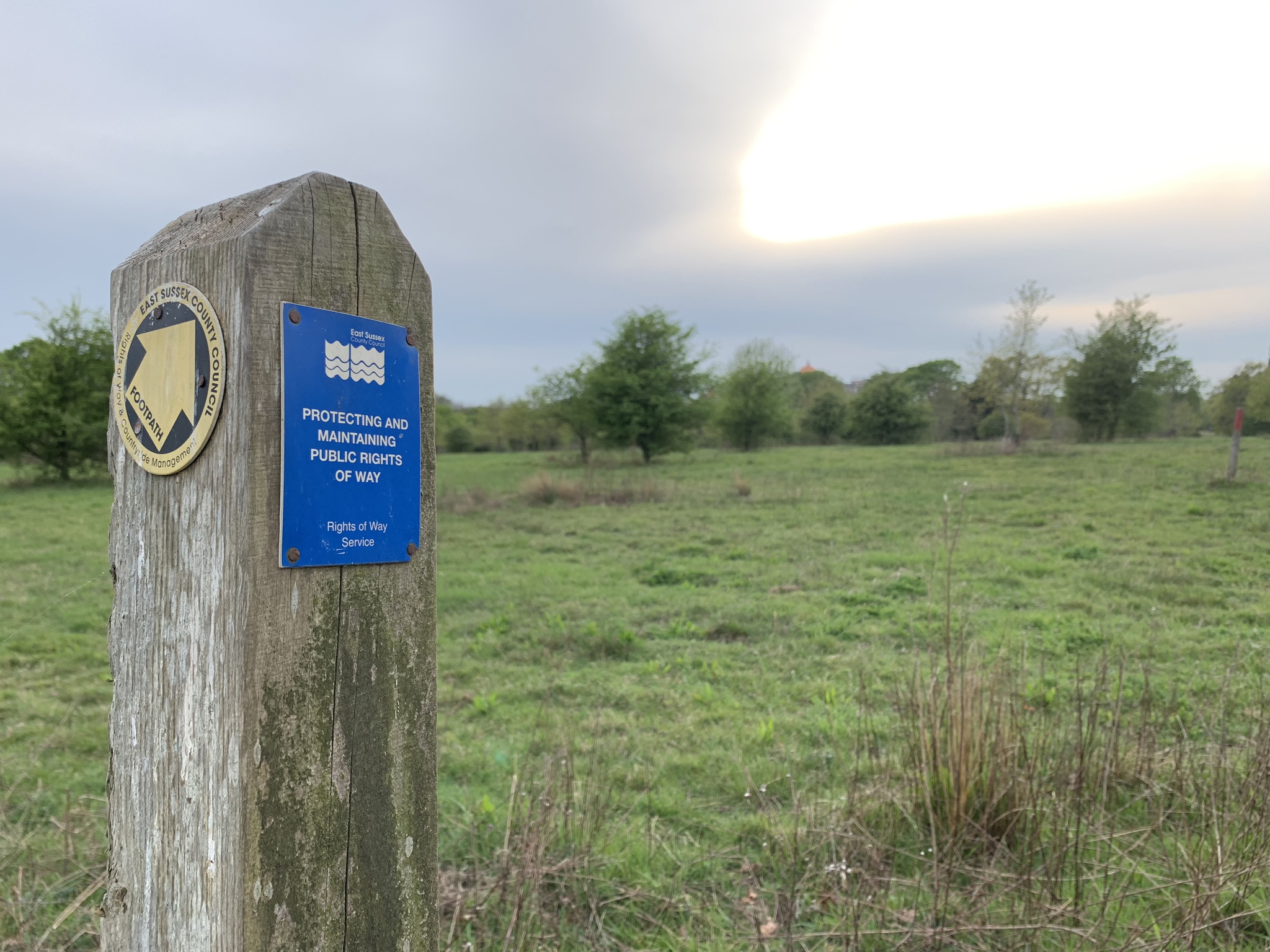 An unassuming footpath, Framfield Number Nine had no pretensions of being anything other than a simple thoroughfare connecting the village of Framfield to Crockstead Green.

From 1862 it dutifully played the role of a benign right of way. It would continue to do so until 1989 when it was abruptly blocked by a barn. The barn had been put up by a company linked to notorious Sussex property tycoon, Nicholas van Hoogstraten.

The footpath then found itself at the centre of a landmark legal battle fought by the Ramblers Association to remove the obstruction. This story involves a £40 million mansion, armed guards, the ‘dirty mac brigade’ and the ‘scum of the earth’. Along the way, the path influenced two acts of Parliament and helped establish the ‘right to roam’.

Born in 1945, Hoogstraten was a British businessman who made his fortune as a “notorious slum landlord.”[1]  However, his reputation goes well beyond a simple failure to maintain his properties.

Hoogstraten disdained his tenants, referring to them as “scum.” When a fire broke out in one of his properties, he is reported to have described the five people who died in the blaze as, “Lowlife, drug dealers, drug takers and queers.”

His villainy, on the surface, appears somewhat cartoonish. He presents himself with bravado and swagger, leaning heavily into the absurdity of his self-made caricature. He was once described by a judge as, “A sort of self-imagined devil who likes to think of himself as an emissary of Beelzebub.”

In 2017 he hit the news after being found speeding whilst driving his Cadillac in Brighton. This was notable due to the name the ticket was issued to – ‘Nicholas Adolf Von Hessen’ – an alias used by Hoogstraten. One can’t help but feel that he is, perhaps, trying a little too hard.

He has described himself as “probably ruthless and … probably violent.” This appears to be an accurate assessment. Odd Days Out have opted to avoid promoting the details of Hoogstraten’s other legal issues, which can easily be found online.

However, it should be noted that he has been linked with a multitude of criminal and civil cases. Some of the cases and accusations levelled at him involve violence and anti-semitism.

Our story relates to Hoogstraten’s attempt to take on the Ramblers. A seemingly inoffensive group who enjoy roaming around the countryside and representing walkers rights. In the mind of Hoogstraten however, they represent “…a bunch of the dirty mac brigade. The great unwashed … disgusting creatures.”

Note: this version of the Framfield footpath saga borrows heavily from the account by legendary campaigner and former chair of the Ramblers, Kate Ashbrook, who fought on behalf of the path. (The full story is well worth a read and can be found here.)

In 1985, Nicholas van Hoogstraten purchased land on High Cross Estate near Uckfield, Sussex to construct the neoclassical Hamilton Palace. This grandiose mansion would be larger than Buckingham Palace and cost over £40 million to build. It would be the most expensive private house built in Britain for a century.

Designed as a mausoleum to hold his body for 5,000 years, Hoogstraten was somewhat irritated to find out that a public right of way crossed the grounds.

In 1989 a local member of the Ramblers noticed a barn was being built on the path – blocking public access. He was informed that he would have to take another route to complete his walk.

The blood of the Ramblers boiled. Hell hath no fury like a rambler denied access to a public footpath.

Correspondence was swiftly sent to East Sussex County Council (ESCC), but no action was taken. According Kate Ashbrook of the Ramblers, ESCC were concerned that its staff may be at risk, and the police were intimidated by Hoogstraten.

Little progress was made until nine years later when, in 1999, the Ramblers’ central office took up the battle.

The Ramblers take the lead

Hoogstraten was never one to shy away from controversy. Revelling in his bizarre villainous persona he told BBC news that Ramblers were “…scavengers. The absolute scum of the earth.”

The Ramblers too stepped up their campaign. In January 1999, their president and Labour MP – Andrew Bennett – led a walk along the path accompanied by police.

In response, Nicholas strengthened his defences, erecting a barbed wire fence where the path joins the road.

The local council stood frozen – either unable to or uninterested in taking on Hoogstraten. It fell on the Ramblers to take legal action.

The battle was on.

In January 2000, the case appeared at Lewes magistrates’ court. Charged with breaching section 137 of the Highways Act 1980, Rarebargain Ltd (the Hoogstraten-linked company who owned the grounds) were found guilty of obstruction and fined.

Unsurprisingly, Hoogstraten didn’t see any reason to obey the findings of the magistrate. The obstructions remained and no fines were paid.

Under pressure, the local council finally gave notice for the removal of the obstructions in March 2000. However, Hoogstraten and Rarebargain were given a get-out clause. If they could come up with a suitable diversion, the notice would be put on hold.

Leaping at the opportunity to keep the ‘scum’ away from the estate, a diversion was quickly drawn up. 5,000 objections were sent in after the Ramblers and the Open Spaces Society asked their members to object. These objections were ignored, and a formal diversion order was published.

This was the wrong time to pick a fight with the Ramblers. At the same time this battle was taking place, Parliament was considering the Countryside and Rights of Way (CROW) Act. This act would finally establish a ‘right to roam’ – something the Ramblers had long campaigned for.

The failure to enforce the magistrates’ decision to remove the obstruction highlighted problems with the current laws. Hoogstraten’s actions and public statements were so ludicrous that he became a perfectly packaged embodiment of the need for this legislation.

Indeed, Labour MP, Gordon Prentice wryly stated that “Nicholas van Hoogstraten has been our greatest ally.” Conservative MPs were exasperated that he was being seen as “typical of landowners.”

Hoogstraten was mentioned on numerous occasions in Parliament during this time. His notoriety so great that a clause was discussed to deal with the specifics of the Framfield Nine case. This ‘Hoogstraten clause’ would become section 64 of the CROW act; it gave magistrates the power to order the removal of an obstruction of a specific date with fines levied if not removed.

Empowered by these new regulations, Kate Ashbrook wanted to test the new powers on the Framfield obstruction.

The case returned to the magistrates’ court in March 2001, Rarebargain (who failed to appear), were once again found guilty of obstruction. Section 64 meant the fines would be higher than before and would increase by £250 each day the obstructions remained.

Still the barn could not be moved. The fines reached £93,250 when any hope of them being paid was given up on.

This lack of enforcement power later led to then Labour MP for Hastings and Rye, Michael Foster, tabling a bill in parliament to ensure these fines could be collected. Whilst not bought into force in time for this case, it eventually became the Highways (Obstruction by Body Corporate) Act 2004.

The Ramblers turned their focus back on the local council, who were still content that their diversion agreement with Rarebargain was valid. Taking the case to High Court, the Ramblers initially lost the case, but were victorious in appeal.

The decision by the council to allow the diversion was quashed. After some further wrangling the site was eventually cleared and the path reopened on the 10th February 2003.

This case set an important precedent. The judge’s ruling is still used today by groups fighting to regain access to public footpaths.

Work on the mansion seems to have stopped some time in 2000.  It now sits unfinished and has been dubbed the Ghost House of Sussex. Locals claim it is being left to crumble. However, time has not mellowed Hoogstraten.  In 2016 he dismissed local critics as ‘moronic peasants’ insisting that the land around the palace was being landscaped.

If visiting Framfield Nine, please do not venture off the public right of way. Odd Days Out would never endorse trespassing onto private property and this really needs to be stressed in this case. Hoogstraten has claimed he has ‘armed guards’ around this site of the palace. Security is understood to still make patrols. That said, no history of any problem with the path has been reported for many years.

To manage expectations we should be clear that Framfield Nine, whilst a pleasant path, is not particularly notable for its scenery.

However, given the battle that took place to keep it open, there is a duty to walk the path and assert your right to access public footpaths.

The Ramblers, in 2012, drew up a route called ‘Mr Van Hoogstraten’s Path’ to mark the battle. The route for this 9.1 mile ramble can be found here.

Odd Days Out however, opted for a shorter, circular route starting and ending in Framfield. We parked by St Thomas à Becket Church in the village.

The route we planned can be seen below.

Framfield Nine itself was accessed without any issue, however, we did have to take a couple of reasonable diversions earlier along the route due to the placement of electric fences. So please use common sense if attempting to follow our path.

Upon passing through the gate that marks the start of Framfield Nine you will soon come across a desolate patch of land. This presumably marks the site where the barn was constructed.

After passing a second gate you will be on the grounds of High Cross Estate – signs to your right will clearly state ‘Private no public right of way’ – please do obey these notices.

Eventually you will see the copper dome of Hamilton Palace protruding above the trees to your right. Enjoy the view and consider how irritated Hoogstraten must be that you – the scum of the earth, a moronic peasant and a proud member of the dirty mac brigade – are gazing upon his creation; protected by laws he inadvertently influenced.

Just please make sure you stick to the path. Even the bravest urban explorer types warn against venturing onto the grounds of the palace.

2019-04-24
Previous Post: On the trail of Hastings’ Concrete King
Next Post: Bata: an industrial utopia in the Essex marshlands