The Temple of Augustus – A Libyan Roman ruin in Surrey

By: ODOjack
In: Art and Architecture, Folly Watch, Historical Footnotes, Surrey
With: 0 Comments 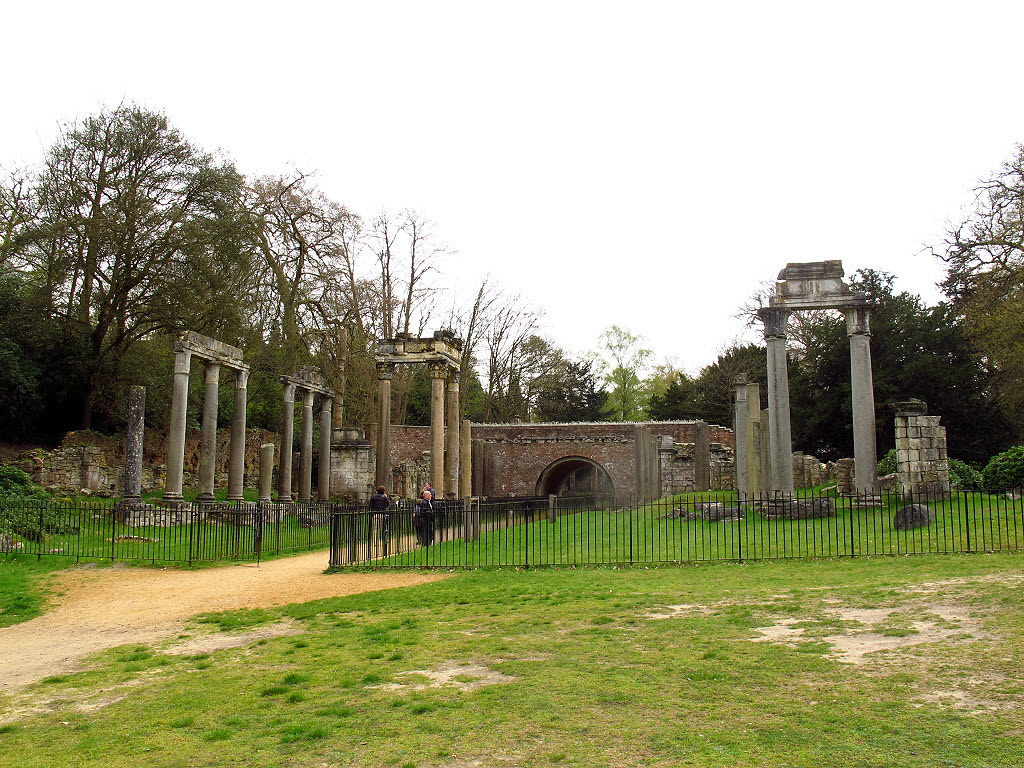 A spectacular series of ancient pillars, a snapshot of the Roman conquest of north Africa – located just south of Windsor. These are the ruins of Leptis Magna, now known as the Temple of Augustus.

Odd Days Out has been to investigate how these ancient ruins found themselves intersected by an A-road in leafy Surrey.

The city of Leptis Magna, in Libya, came to prominence in 193 AD. Under Emperor Septimius Severus it became the third most important city in Africa and lavishly wealthy. It was said that its splendour rivalled that of Carthage and Alexandria.

The city had magnificent docks and a huge basilica replete with ornate carved columns. After Severus death in 211 the city began to decline. Natural disasters and invasions in the 5th and 7th centuries, saw the city eventually fall to ruin.

This, however, was not the end of the story for the great columns of Leptis Magna.

Hanmer Warrington and his vision

In 1816, a man named Hanmer Warrington visited the Roman ruins of Leptis Magna. He and his friend Augustus Earle were infatuated by the beauty of the ruins on the coast of Ottoman Libya. A keen painter, Earle made a watercolour of the ruined city.

However, Warrington set his sights on a souvenir slightly larger than a watercolour – he wanted the ruins themselves.

Just a few years before, Thomas Bruce, the Seventh Earl of Elgin had stripped the marble from the Parthenon in Athens and gifted it to the British government.

The Earl was hailed as a hero for his actions and Warrington hoped he could receive a similar reception by bringing back the ruins of Leptis Magna.

So he set about to ‘Elgin’ the ruins and convinced the local governor he should be allowed to take them back to Britain.

A city on the move

Warrington was not the first to want to carve a slice from Leptis Magna. Louis XIV had taken 600 columns and installed them in this palace at Versailles in the 17th century. Rouen Cathedral and the Abbey of Saint-Germain-des-Preps in Paris also sport Leptis columns of their own.

The local Libyan people were furious at the idea of more of the ruins being taken away, but not for the reasons you may expect. This was not a conservation effort, rather the locals had been using the stones for building work and the round columns as mill stones. They were not keen on Warrington stealing what they saw as a vital supply of stone.

In an act of malice, they went so far as to destroy some of the columns whilst they sat waiting to be loaded onto the ships Warrington had commissioned.

Leptis Magna is now a UNESCO world heritage site and the remaining ruins are among the best-preserved Roman sites in the Mediterranean.

A new home for the ruins

The surviving columns arrived in the United Kingdom, but not to the fanfare Warrington had hoped for. A source at the time stated that the British government was not “at all impressed or convinced of the value, either aesthetic or intrinsic, of the cargo.”

The ruins sat unappreciated in the forecourt of the British Museum for eight years.

Then, in 1826 Jeffry Wyatville, King George IV’s architect, expressed an interest in them. Wyatville decided he would put the ancient ruins to good use by constructing his own take on a ruined Roman Temple.

A site was found overlooking the man-made lake at Virginia Water in Surrey and the Roman Temple was reconstructed. It was named “The Temple of Augustus” likely a reference to George IV’s full name: George Augustus Frederick.

Somehow, the remains from the ancient, mighty city of Leptis Magna ended up as a Surrey folly. Indeed, you could say that the ruins now stand as a monument, not to ancient Roman gods, but to the British arrogance of the colonial age.

Nearest railway stations are Egham, Windsor Central and Windsor Riverside, Ascot and Virginia Water. From London Paddington – First Great Western trains operate a service to Windsor Central via a change at Slough. South West Trains operate services from London Waterloo to the other stations. A taxi will be needed to complete your journey into the Park – this usually takes around 15 to 20 mins depending on traffic. The mountain biking trails of Swinley Forest are 1.7 miles from Martins Heron train station and 2.1 miles from Bracknell train station.