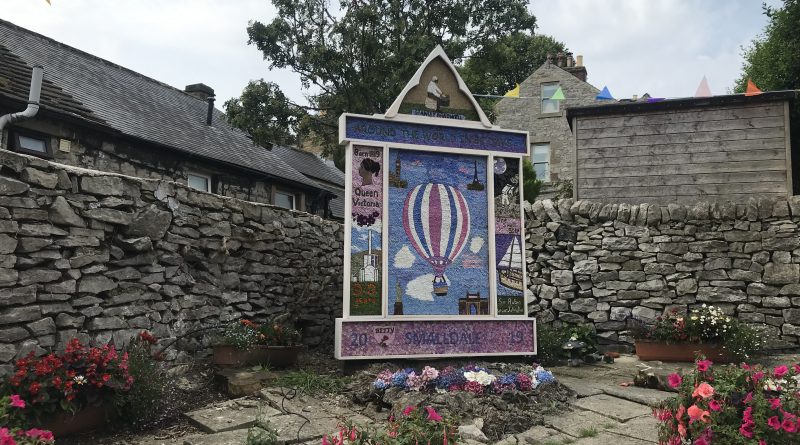 The specific origins of the ancient practice of Well Dressing may be lost to time, however in recent years it has come to form a key part of rural life in the Peak District. Bringing people together in a celebration of all things local these wonderful displays are all at once spectacular and transient.

Well Dressing is generally assumed to have Roman or pagan origins – historians speculate that the modern day tradition of decorating wells could have been proceeded by sacrifices or offerings to deities associated with the wells. Nowadays the offerings are less grisly and more beautiful, with unique artworks created for each well.

The custom previously almost died out but has been revived in recent years to coincide with Wakes Week in Derbyshire villages. The Wakes Week celebration nods to the ‘wake’ which formed a part of the religious celebration of local patron saints’ days. Locals would stage all night vigils and these were sometimes extended into wider entertainment.

These single day events found themselves extended to become week-kong community celebrations during the Industrial Revolution, coinciding with weeks when factories or mills would close for a week for maintenance. These weeks became firm fixtures on the village calendar and now form an important part of village life. The dressing of the wells in the village, and the public blessing ceremony, was folded into Wakes Week to take advantage of the same community spirit.

The temporary murals that adorn a well are no small feat – these are large artworks painstakingly assembled by teams of volunteers. Firstly, the boards which contain the artworks need to be soaked completely through. This is done by tethering the boards and leaving them to soak in local waterways.

Once the boards are thoroughly soaked is clay is placed into the frame and smoothed into a layer before being allowed to set. Once it is slightly set a design is imprinted onto the clay by hand. Normally the design is drawn onto paper and then transferred to the clay by ‘pricking’ through the paper with a suitable implement.

After the design is transferred the most detailed part of the work begins. The designs are filled in using natural resources including petals, plants or even wool and eggshells – there’s no limit to what can be used. One local we spoke to explained to us that there was often a rush to try and secure the best resources for this part and it was not known for minor arguments to break out over particularly precious colourings!

When everything comes together the dressing is carefully moved to its respective well and secured in position. Charity boxes are then often left at the base of the well and the collected monies is used to support the activities of Wakes Week or charities as agreed by the village.

Blessing of the Wells

The crowd walk through the village stopping at each well to be led in a prayer and then a hymn, accompanied by the band. Everyone in the village who was not part of the procession were in their gardens waiting for the procession to go past — it’s easy to see how this ceremony, and the Wakes Week itself, can be a very important part of village life.

Throughout the rest of Wakes Week the village came together to celebrate in other ways, there were extra quizzes, performances, a carnival and, one day, a tennis ball race involving hundreds of tennis balls being let go from the highest point in the village.

This ceremony brings together all the elements of the Well Dressings which make them so unique. Drawing on the quasi-religious origins and putting them at the heart of village life in a way that brings together both young and old.

Well Dressings are charming part of village life, bringing the community together and enlivening the Peak District with their intricate artwork and bold colours. For tourists this snapshot of village life is comforting in its nostalgia but this should not take away from the work that goes on behind the scenes to ensure that the tradition stays alive. The painstaking work to create these temporary masterpieces is a testament to the effort that goes into ensuring that these village traditions remain viable, vital and vibrant.