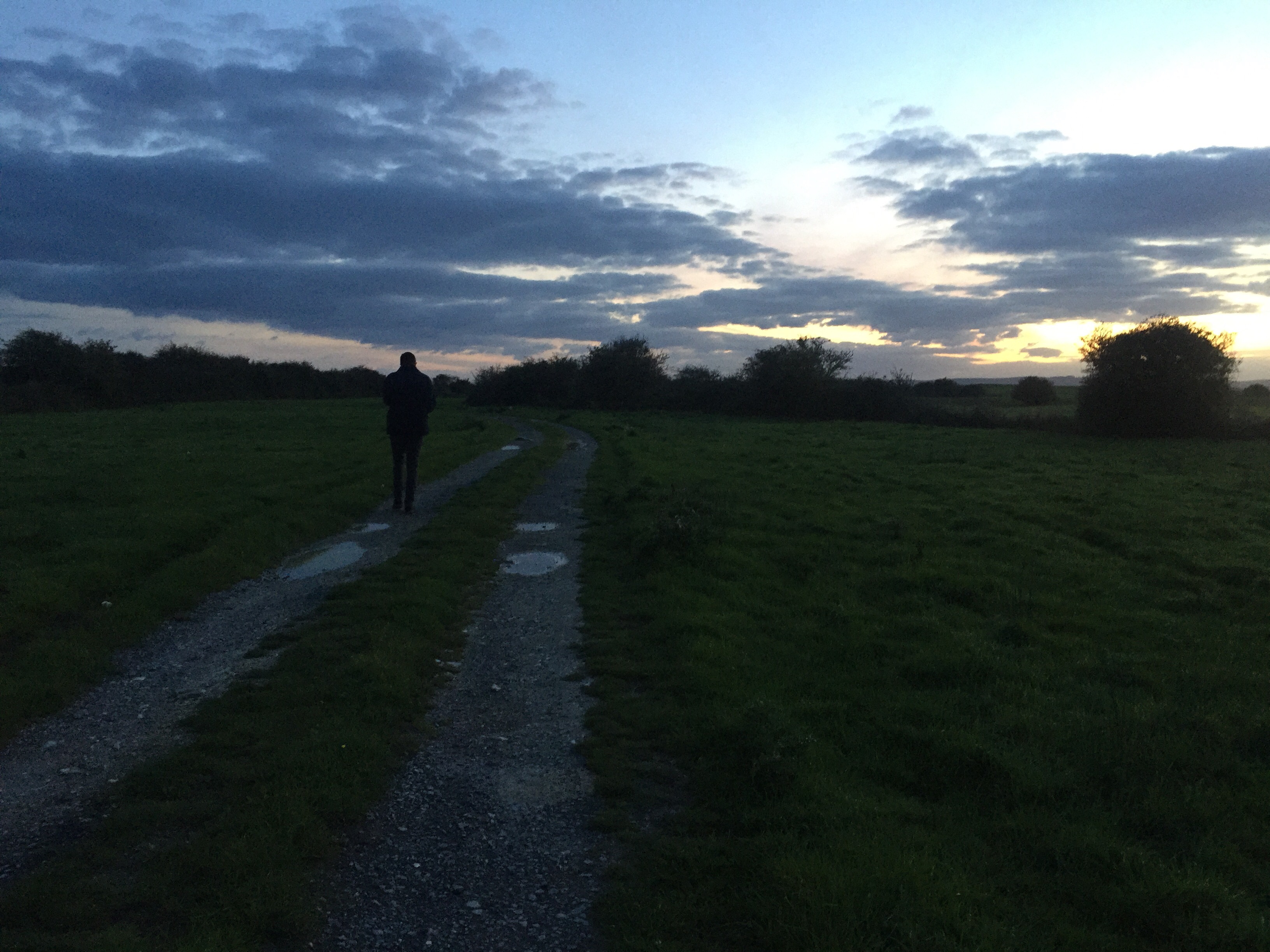 An underestimation of how quickly the evenings were closing in resulted in a mad dash to find this lost village before we were plunged into complete darkness. Parking in a precarious partial lay-by/bush on a single track road, ODOmatt was forced to climb across from the driver side through the passenger door to avoid the brambles. 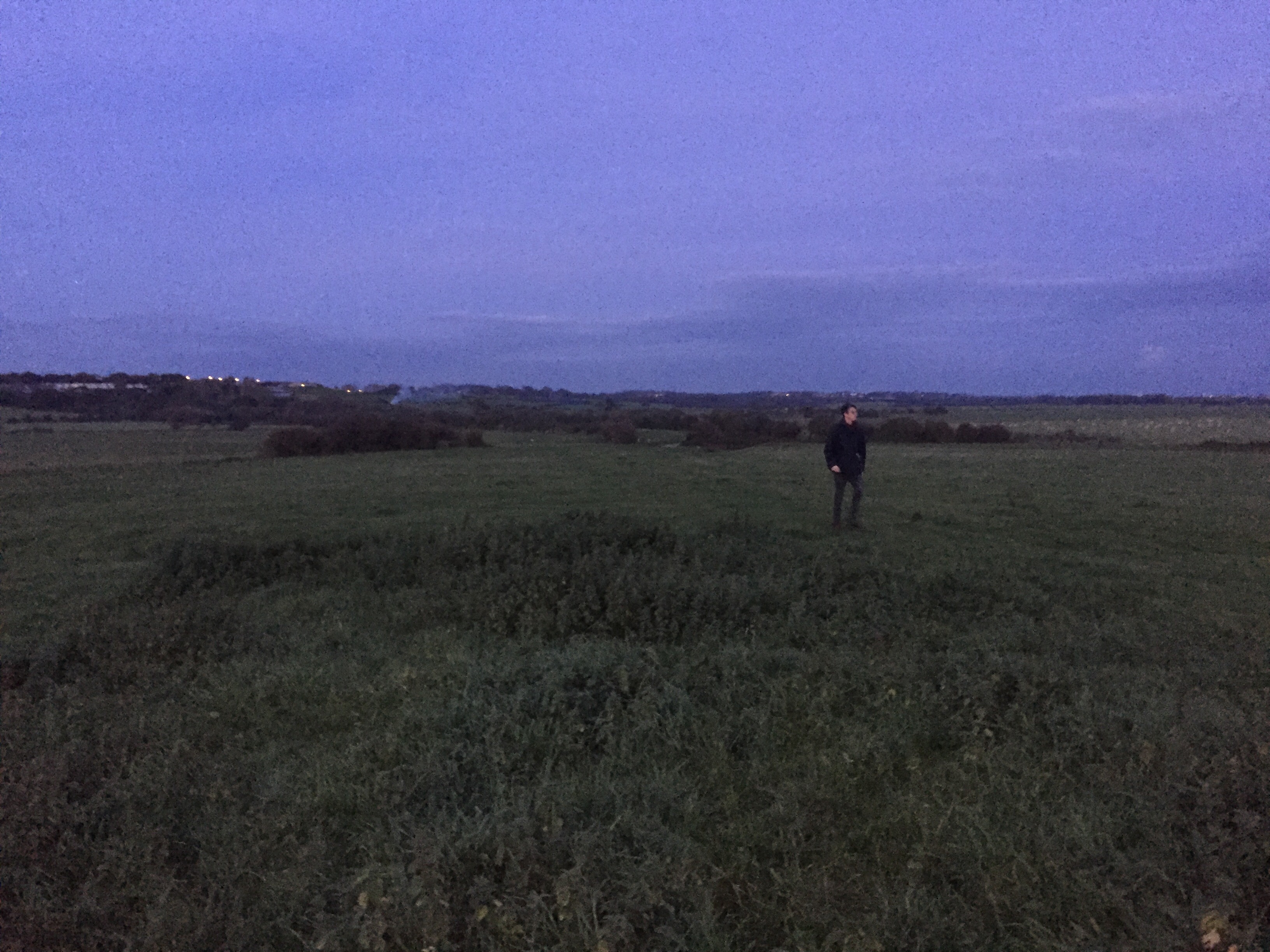 We quickly identified what we were fairly confident was a public footpath – despite the lack of any signs to actually indicate that this was the case – and set off to find the lost settlement of Northeye which after a short walk revealed itself to be a series of small earthworks in a field.

The deserted village of Northeye is situated in an area known as the Hooe Level on the Pevensey Levels – a lowland marsh area between Bexhill and Eastbourne.

Originally much of the Pevensey Levels would have been submerged at high tide and the settlements in the area would have been on small islands or ‘eyots’, many of the present day villages in the area have retained the suffix ‘ey’ or ‘eye’ as a result. (e.g. Chailey or Pevensey).

One of the key economic impetus’ for the development of the marsh would have been salt extraction, the domesday book records that the edges of Pevensey Marsh supported 100 salt works, suggesting salt water still flooded much of the area at this time (1086). Several mounds in the vicinity of the village suggest this would have played a role in the economy of Northeye.

The position of the village has led some to speculate that it could have been a port, though this is dismissed by author of the ‘Lost Villages of England’, Leigh Driver.

Despite the limited documentation of the village it may have had some significance in the 13th Century as it was mentioned as a dependent limb of the Cinque port of Hastings in a 1229 charter.

The reason for the decline of the settlement is unclear but economic factors such as the decline of salt extraction, drainage of the marshes and general economic hardship in the 14th century have been suggested. The devestating storms along the coast in the late 13th Century may also have played a part, leading Vigar (Lost Villages of Sussex) to conclude that ‘depopulation of the site was almost certainly brought about by the silting up of the channel’. 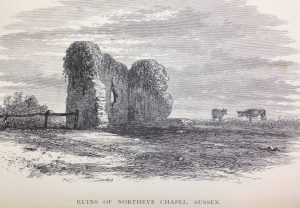 Two excavations of the site took place last century (1938/39 & 1952) and a number of remains were found, including walls, parts of a column and carved stones, but like with most things related to this village, much of the evidence from these excavations was lost.

Most sources indicate that the last remains of the chapel were lost sometime in the 19th century – the sketch (left) shows the state of the ruins in 1857. 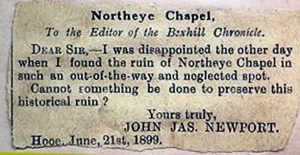 A letter to the editor of the Bexhill chronicle in 1899 indicates that at least some remnants existed up to this point.

Nowadays only earthworks can be seen, little is known about the structure of the village other than the position of the chapel at the centre (Chapel of St James, foundation charter 1262) and the undulations along a sunken track may indicate the locations of housing platforms and enclosures.

Unfortunately it is difficult to get away from the fact you are visiting an empty field, so getting someone to go with you is going to be a hard sell. The lack of any remains means this lost village really does require some imagination. That being said, The earthworks are fairly stark in contrast to the flat fields that surround the site, and, really, who needs some old ruins when you’ve got earthworks and are prepared to come equipped with the aforementioned imagination.

With nothing to mark out the significance of the path to the village there is an eerie atmosphere as you approach the small bridge to take you onto the site of Northeye (the atmosphere was perhaps aided by our visit being at sunset); at which point one can appreciate the ease with which a whole settlement or community can disappear into history and insignificance.

Northeye is what it is, a very lost village. Other lost villages may well be more flashy with their 14th century dovecote remains and their tiny churches, they may be more interesting or at the very least have some historical relevance; however, a visit to Northeye is a must for any lost village hunter precisely because it has none of these things.

The path to the village can be acessed via a small road which runs behind a caravan site off Barnhorn Lane. We could only find a single (very small) lay-by to park in, the general location of which is indicated on the map below. There is also a cafe nearby, but it was closing as we arrived so we were unable to use its car park. 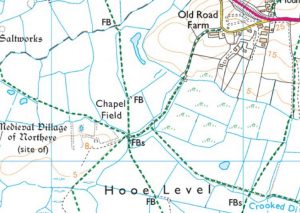 From here the path to the village is behind a rusted gate held to a post by a blue rope. Nothing is in place to indicate this is a public footpath, but a subsequant gate a short walk down the path is labeled as such.

Continue walking down this path until you reach a point where the path diverges, ahead of you will be a bridge – across this is the site of Northeye.

The Lamb Inn is the nearest pub. Unfortunetly we missed the turning to so ended up in the Smugglers Inn in Pevensey, which happened to be hosting a performance by the Pevensey Ukulele Group when we arrived.